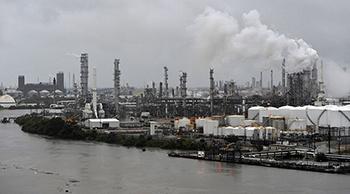 The passage of Tropical Storm Harvey over the Gulf of Mexico resulted in about 22 percent of all US offshore oil production there being offline on Saturday, a rise of three percentage points since Friday.
The shortfall equates to roughly 377,117 barrels of oil per day fewer than the usual figure of roughly 1.75 million bpd pumped from the Gulf, according to the US Department of the Interior’s Bureau of Safety and Environmental Enforcement (BSEE).

About 23 percent of natural gas production in the gas, or about 748 million cubic feet per day, was also offline, the report said.
BSEE Hurricane Harvey Activity Statistics: August 26, 2017https://t.co/9XkIdGR6WIpic.twitter.com/PYuAmkwuoJ
— BSEE (@BSEEgov) August 26, 2017
Operators evacuated 86 Gulf offshore platforms in preparation for Hurricane Harvey, compared to 737 manned platforms currently producing oil and gas in the area. Personnel were also pulled out from four out of the 10 mobile seabed-moored rigs operating in the Gulf while one dynamically-positioned rig was instead moved out of the storm’s path.
Earlier reports by BSEE suggested that the shortfall equated to 428,568 barrels of oil per day, or 25 percent of the total US offshore oil production in the region. Some 26 percent of the Gulf natural gas production went offline because of the hurricane, according to the same report, which amounts to about 835 million cubic feet per day.
The number of evacuated offshore platforms was initially put at 112.
Harvey was downgraded from a hurricane to a tropical storm by the NHC late on Saturday. The largest storm to hit the United States since the disastrous Hurricane Katrina in 2005 has so far claimed three lives.