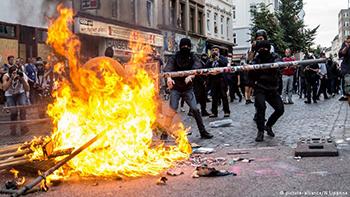 The first G20-related trials against protesters detained during the summit are set to get underway this week. As Rob Mudge reports, the cases in question are courting a great deal of controversy.
Bringing the G20 summit to Hamburg this June was Chancellor Angela Merkel’s idea of presenting the city as the “gateway to the world” – a special welcome to world leaders. Instead the violent events that transpired left the city bidding visitors “welcome to hell” – the motto of one of the protests organized by one of the autonomous, anti-capitalist alliances.

Now, the first trials against suspected participants are set to get underway at Hamburg’s regional court.
Stanislav B, a 24-year-old art student from Poland, was stopped and checked by police outside Hamburg Dammtor train station. In his backpack police discovered a number of firecrackers and a canister that could – potentially – have been used as a teargas cylinder.
According to Carsten Rinio, chief prosecutor with the Public Prosecutor’s Office in Hamburg, it is illegal in Germany to carry the objects in question. “There are certain objects that you are not allowed to carry with you without official authorization. Some objects fall within the scope of gun control and explosives laws,” he told DW.
Blurred lines
Legally, it would appear to be a pretty clear-cut case. However, Stanislav’s lawyer, Jonathan Burmeister, makes an interesting distinction. “He was checked by the police without any reason and they found pepper spray and a very small firecracker, the size of your little finger. The problem was they were bought in Poland and don’t have the certification mark required in Germany. So when you buy pepper spray in another country it’s automatically illegal in Germany,” he told DW.
By implication that would mean the purchase of those items in Germany would have been legal. “The pepper spray could be legal if you would have ordered it in Germany. The same with the firecrackers. The only reason is that there wasn’t a German stamp on them,” says Burmeister.
Now, if you’re still wondering why he was detained absent his participation in and the use of the objects found in his possession, a closer look at German law is helpful. “There are certain objects – and this is a particularity under Germany’s penal provisions pertaining to the freedom of assembly – that you are not allowed to carry on you with the intention of taking part in a demonstration,” says chief prosecutor Rinio.
@dwnews – Hamburg residents clean streets after violent G20 protests
Political motivations
Still confused? Well, according to Stanislav’s lawyer the reason his client is still being held is actually very straightforward: “The only legal reason in law for pretrial custody is to ensure the trial [goes ahead]. And I am 100 percent sure that in this case it’s not happening because of this legal reason it’s happening for political reasons.”
Burmeister says he’s incensed about the situation and draws parallels to recent unsavory practices in other countries. “This is something that Erodgan in Turkey does. He detains people from Amnesty International or journalists – and we are rightfully angry about this – but at the same time we’re doing it in Hamburg.”
It does make you wonder what the German authorities’ motivations are – especially if you take into account that Stanislav B. has no existing police record and a fixed abode in Warsaw and could, in theory, be released until the trial starts. The concern for Hamburg’s authorities is that he would simply not appear for his trial. However Burmeister is dismissive of that argument: “You know we have an arrest warrant for Europe. You can you can ask someone to be arrested in Poland and it takes a few hours and he or she is arrested.”
Just an average guy
In an attempt to highlight his client’s perceived unfair treatment, Burmeister paints a somewhat rosy picture of his background. “He studied in England this year, his father is a professor and his mother works in a law firm. There’s definitely no reason to think that he wouldn’t come, so this custody has a political reason.”
But Kai Wantzen, press spokesman for the Higher Regional Court in Hamburg, is quick to counter that claim. “The courts are not political pawns. Decisions are made purely in accordance with the law.”
While opinions will inevitably vary on the matter, Burmeister argues that his client’s case was used to send a clear message. “The Hamburg government decided to send a message to all foreigners coming to Germany for the demonstrations or for acts of violence. And to send this message they used my client and this is not fair because he wasn’t at any demonstration and he didn’t do anything bad to anyone.”
G20 Summit – problem or solution?
Aside from the legal and political ramifications, there is also concern about Stanislav’s physical wellbeing and his treatment in custody. Burmeister says there have been some disturbing instances of authorities withholding fresh clothes and other items.
“He needs water for his contact lenses – he didn’t get that for four weeks. From the first day in prison we had supporters to bring him underwear but for weeks they refused to allow that. I was refused visits, and I had to threaten with going to the press or organizing protests so that they would allow his mother to visit him. And I must say I feel ashamed about this happening in Germany.”

Many protesters traveled from other countries, but are German authorities doing more to keep them in detention?
Stanislav is not the only foreigner being held in pretrial custody awaiting trial. Peike S, a 21-year old from Amsterdam, has been charged with a litany of offenses ranging from seriously disturbing the peace to grievous bodily harm and resistance against police officers. Of the 32 people still in custody, two-thirds are foreign nationals, among them Russians, Italians, French and Spanish.
Discriminating against foreign nationals?
So is there a deliberate tendency here targeting foreigners? No, says chief prosecutor Rinio. “The prosecutor’s office has recently pressed charges against a German national, so I don’t see a trend here.”
Burmeister is not convinced and says it’s a problem of European law and European arrest warrants. “There’s no reason to say when you’re this side of the border you can go home and when you’re from the other side of the border you have to stay here.”
He point’s to the situation of Peike S as a case in point for what Burmeister regards as blatant discrimination against a foreign national. “For example the Dutchman, he lives closer to Hamburg than someone from Munich. But if he had been from Munich, I’m sure he wouldn’t have to stay in prison.”
Burmeister says he raised the matter with the court but his legal arguments were dismissed.
The violent protests at the G20 summit left an indelible mark on the city, its inhabitants and on local and federal politics. The outcome of the first two trials won’t bring closure, but their impact could have further political and legal ramifications for Germany.