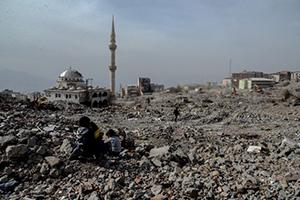 By TM
A report released by the Human Rights Association (İHD) has revealed that 2,722 people have been killed in violence in Turkey’s Southeast since the end of a settlement process on July 24, 2015, Cumhuriyet reported on Sunday.

According to the report 447 soldiers, 251 police officers and 43 village guards were killed and 1,699 were injured in clashes across Turkey in the last two years.
Fifty-three civilians were killed and 80 injured in the same period.
The IHD report notes that 448 people have been killed and 379 wounded by security forces in extrajudicial killings in eastern and southeastern Turkey.
One hundred twenty-nine civilians were killed and 588 injured in outlawed Kurdistan Workers’ Party (PKK) attacks targeting military and civilian zones, while another 14 were killed after being abducted by the PKK.
Special security zones have been imposed 123 times by security forces, while daylong curfews were declared 250 times in 11 provinces and 45 districts in the region in the same period,
A total of 1,279 people have faced maltreatment and 97 have been abducted.
Thirty public workers, seven soldiers, one police officer, one district governor and one politician who were abducted by the PKK have been handed over to security forces with the mediation of civil society organizations including the İHD.
The report states that 25 media organizations including four TV stations, two news agencies, 18 newspaper and one radio station, 468 associations, 139 schools, 26 student dormitories, two universities, 27 foundations and 11 educational and cultural organizations have been closed in the region by the government.
Forty-seven associations, four foundations and 12 schools were later reopened.
Turkish authorities had conducted direct talks with jailed PKK chief Abdullah Öcalan for several years until a truce in effect collapsed in July 2015.
Since then, there have been heavy clashes between the PKK and Turkish security forces.
More than 40,000 people, including 5,500 security force members, have been killed in four decades of fighting between the Turkish state and the PKK, which is listed as a terrorist organization by Turkey, the US and the EU.