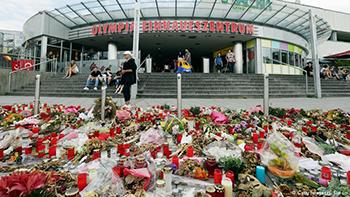 One year after David S. killed nine people at a Munich shopping mall, the man who sold him the weapon faces charges of involuntary manslaughter. The court will determine whether the man knew of the shooter’s intentions.

A Munich court on Monday opened proceedings against 32-year-old Philipp K, who the prosecution alleged supplied the weapon used in a deadly rampage at Munich’s Olympia mall last year.
The accused faces nine charges of involuntary manslaughter and the sale of illegal arms, after he allegedly provided the attacker David S. with a Glock 17 gun and 450 rounds of ammunition.
David S., a 17-year-old Nazi sympathizer who suffered from mental illness, is believed to have acquired the weapon from Philipp K. after the two made contact over the darknet. They then met up in the central German town of Marburg where they made the exchange.
The court will seek to determine whether Philipp K. knew of the teenager’s murderous intentions when he sold him the weapon.
Philipp K. was detained in August 2016, days after David S. killed nine people and injured 16 at the Olympia Mall, before killing himself. Investigators tracked him down after tracing further darknet weapons sales. Aside from selling the weapon to David S., he also faces charges of violating Germany’s Military Weapons Control Act, which prohibits the sale of military-grade weapons.
The trial is scheduled to span 10 hearings lasting until September 19.
dm/rt (dpa, AFP)