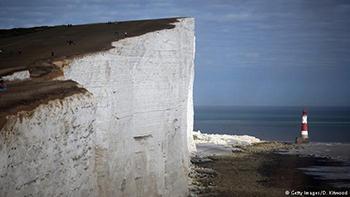 Residents and tourists in a southern English seaside town have been taken to hospital after inhaling a noxious ‘haze.’ Police said the chemical mist appeared to spread inland from the sea.
Cliff tops and beaches near the town of Eastbourne in southern England were evacuated on Sunday after hundreds of people were affected by a mystery chemical mist.

More than 100 people were treated in hospital after reporting breathing difficulties, stinging eyes and sickness from the haze, the BBC reported.
The broadcaster cited East Sussex Healthcare NHS Trust as saying that 133 people were being “decontaminated” at one of its hospitals.
Other British media quoted local police as saying up to 50 people were affected when the incident was first reported at about 5pm local time (16:00 UTC)
Emergency services warned the public to stay away from beaches and to keep doors and windows closed due to the unknown noxious substance.
In a statement, Sussex Police said the haze appeared to be coming in from the sea, adding that it had yet to establish the source.
Local residents described how a packed beach at Birling Gap emptied in just a few minutes due to the sudden spreading of the haze.
One local, Jonathan Hill, tweeted that he “thought it was hay fever to start with until we were told to close all windows and doors just now!”