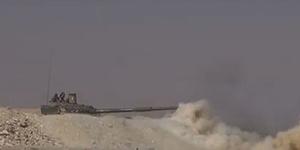 The reporter pointed out that an army unit thwarted an attack of ISIS terrorist groups on military posts in the axis of al-Reshdia, killing or injuring many of the terrorists.
He pointed out that the Air Force of the Syrian Army directed blows to ISIS fortifications in al-Reshdia, the surrounding of Liwa al-Tameen and in the towns of al-Mayadeen and Mohasan and the villages of al-Shomeittia, al-Tebni, al-Masrab and al-Kharitta, killing many of the terrorists and injuring others.
Local sources said that locals in Deir Ezzor killed many terrorists and confiscated their weapons.
Homs
Units of army, in cooperation with backup forces, established control over the Hill of communications to the east of al-Sukhnah in Homs countryside and killed a number of ISIS terrorists.
Hama
Meanwhilee, army units killed a number of ISIS terrorists while they were trying to open a gap in the tight circle imposed by the army on the terrorists in eastern countryside of Salamiyeh.
SANA reporter in Hama said that army units clashed with ISIS terrorists in Wadi al-Azib area while they attempting to attack a military point in order to open a gap to break the siege on terrorists on Sabora-Athrya axis in eastern countryside of Salamiyeh, killing 13 terrorists and injuring many others.
The reporter added that an army unit carried out special strikes on the axis of infiltration of a terrorist group on the axis of Salba village in Akyrbat area, destroying a BMP vehicle, killing and injuring a number of the terrorists.