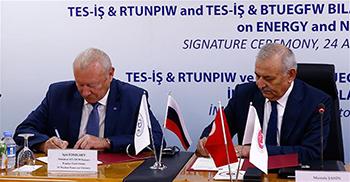 Turkey and Russia signed a key cooperation deal in the context of nuclear energy development in the Turkish capital Ankara on Aug. 24.

The Russian Trade Union of the Workers of Nuclear Power Engineering and Industry and Turkey’s Energy, Water and Gas Workers’ Union inked the agreement in a bid to establish information exchange and provide solidarity support, both on a bilateral basis and within the framework of international professional centers.

According to a statement by the parties, which was released on Aug. 25, the partners agreed to share their expertise in protecting the economic, social and labor interests of workers in nuclear energy and industry, holding international forums and conferences on energy development and social partnership in the energy sector.

Trade unions also plan to focus on establishing joint training programs for vocational guidance of young people, creating conditions for professional training of foreign specialists for nuclear energy and a number of other tasks that can influence the development of public and labor relations between Russia and Turkey.

“The signed agreement has given start to long-term cooperation between the trade unions of Russia and Turkey and will serve as a guarantor of fulfilling all the items hereof on the widest range of issues, whereas the mutual contacts will serve to strengthen solidarity and unity between related trade unions,” commented Igor Fomichev, the Russian union’s chair.

The agreement was signed by Fomichev and Mustafa Şahin, the Turkish chair of the Energy, Water and Gas Workers’ Union, according to the statement.

Vladimir Diklov, the chairman of the Belarusian Trade Union of Workers of Power Supply, Electrotechnical and Fuel Industries, also attended the ceremony.