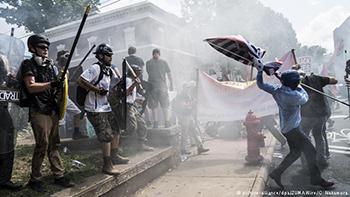 US Secretary of State Rex Tillerson has distanced himself from President Trump over the racial unrest in Charlottesville. The country’s former vice president went further, accusing the billionaire of emboldening racists.
Tillerson on Sunday appeared to separate American values on race from those of US President Donald Trump, when asked to comment on the deadly violence at a far-right rally in Charlottesville Virginia earlier this month.

In a television interview the top diplomat said the country’s determination to fight racial injustice was clear cut.
“We express America’s values from the State Department. We represent the American people, we represent America’s values, our commitment to freedom, our commitment to equal treatment of people the world over and that message has never changed,” Tillerson told Fox News Sunday.
He added that no one could doubt the commitment of the US government or its agencies to advance and defend those values.
Frustration at response
Tillerson was then given another chance to defend Trump when the interviewer asked: “And the president’s values?”
“The president speaks for himself,” Tillerson replied.
US president defends Charlottesville response
Three people were killed and dozens injured over the weekend of August 11 and 12 at the Charlottesville rally, which featured white supremacists, white nationalists, neo-Nazis and other ultra-right wing groups.
Trump has faced censure for initially delaying for several hours any comment on the violence before appearing to morally equate neo-Nazis with those protesting against them.
Trump condemned an “egregious display of hatred, bigotry and violence, on many sides” before adding that there were “very fine people” on “both sides” of the protest,” which began in an attempt to protect a statue of a Confederate general from the American Civil War era.
While his remarks were celebrated in nationalist circles, they were quickly rounded on by critics and have attracted extensive news coverage at home and abroad.
Biden’s sharp rebuttal
Also on Sunday, former vice president Joe Biden hit out at the billionaire president’s “willingness to divide this nation” which he said “knows no bounds.”
“We have an American president who has publicly proclaimed a moral equivalency between neo-Nazis and Klansmen and those who would oppose their venom and hate,” and who had thereby “emboldened white supremacists.”
The president’s response to the Charlottesville violence has also been rebuked by a top United Nations body on racial discrimination, which urged Washington to “unequivocally and unconditionally” reject racist hate speech and crimes after the rally in Virginia and called on Trump to take the lead.
Earlier this week, a poll released last week by Quinnipiac University showed most Americans disapprove of the president’s response to the unrest.
By a margin of 60 percent to 32 percent, respondents opposed Trump’s comments shortly after the violence, and by a similar margin they rejected the way he has handled race relations, the survey showed.
Almost two-thirds of those polled believe hatred and prejudice have increased since Trump’s election last November.
mm/jm (AFP, AP)