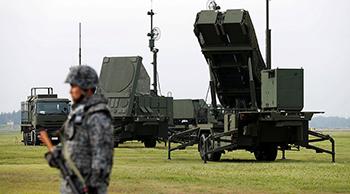 A Japan Self-Defense Forces (JSDF) soldier takes part in a drill to mobilise their Patriot Advanced Capability-3 (PAC-3) missile unit in response to a recent missile launch by North Korea, at U.S. Air Force Yokota Air Base in Fussa on the outskirts of Tokyo, Japan August 29, 2017 © Issei Kato / Reuters
Japanese PM Shinzo Abe has held a phone conversation with US president Donald Trump, in which the two leaders agreed to ramp up pressure on North Korea after its latest test of a suspected intermediate range ballistic missile which flew over Japan.

Following the conversation, Abe told reporters that Trump restated Washington’s full commitment to their ally’s security and assured him that the United States was “100 percent with Japan.”
After Tuesday’s launch and flyby over Japanese territory, the country’s prime minister vowed to do everything in his power to protect his nation.
“We will make utmost efforts to firmly protect the lives of the people,” Shinzo Abe said Tuesday before convening an emergency session on the missile firing, Reuters reports.
The Japanese PM called the missile launch “an unprecedented, serious and significant threat” which seriously diminishes peace in the region.
Abe also said that Japan had “requested an emergency meeting of the UN Security Council.”
The UNSC is reportedly scheduled to meet Tuesday. The time of the meeting has not yet been confirmed.
“South Korea, the US and Japan jointly requested the UNSC hold an emergency meeting to address an emergence of threats to the peace and security,” an official at S. Korea’s foreign ministry told Yonhap.
Both Russia and China supported the last round of UN Security Council sanctions against Pyongyang – although Moscow and Beijing have been offering their own roadmap out of the crisis. The “double freezing” Chinese-Russian initiative, welcomed by Germany but firmly rejected by Washington, proposes that North Korea stops its ballistic missile and nuclear activities while the US and its allies simultaneously halt their war games in the region.
Japan’s Chief Cabinet Secretary earlier described Pyongyang’s latest action as a “grave threat.”
“This ballistic missile launch appeared to fly over our territory. It is an unprecedented, serious and grave threat to our nation,” Yoshihide Suga told reporters, according to Reuters.
Suga added that Tokyo will work closely with Washington and Seoul, as well as other regional countries to issue an appropriate response.
On Tuesday morning, North Korea launched a ballistic missile over Japan. The missile flew about 2,700 kilometers at a maximum altitude of around 550 km before landing off the Japanese coast, South Korea’s military said.
The latest launch by Pyongyang marked the fifth time a rocket has passed over Japan. In 1998 and 2009, North Korea launched rockets that sailed through Japan’s airspace. Two other missiles flew over Japanese territory in December 2012 and February last year.