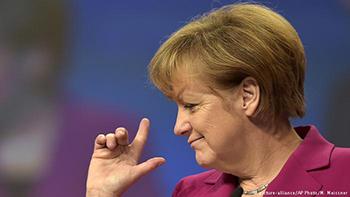 In and out of campaign mode, German Chancellor Angela Merkel exhibits a talent for sucking the wind out of her opponents’ sails. DW looks at some of the tactics that have helped her gain and hold onto power for so long.
About-face on nuclear energy

“When I look at how many nuclear power plants are being built around the world,” the chancellor said in 2009, “it would be a great shame if we got out of this sector.”
But that is exactly what Angela Merkel did in 2011. In light of the Fukushima disaster, she opted for a fast and final end to nuclear power in Germany. This had been a core issue for the Green party for decades. Contrary to her earlier comments, Merkel, a trained physicist, has since said: “The risks of atomic energy cannot be safely controlled.”
Military conscription ends (for now)
Around the same time, military conscription came to an end, much to the chagrin of her conservative party, the Christian Democratic Union (CDU). Many younger Germans favor a professional military, however, a position that Merkel did not overlook. Given Germans’ mixed feelings on the topic, military conscription was only suspended rather than done away with permanently.
Family politics
To the dismay of many conservative hardliners in the CDU, Merkel has pulled her party towards the middle of the political spectrum when it comes to family policy. The Christian Democrats’ traditional stance of “dad brings home the bacon and mom puts it on the table” was done away with after the decision to offer comprehensive preschool for kids three and under – a reaction to a wholly different reality for business and society. The Left party had been leading the charge for it, but it was the conservatives whose support pushed it over the line.
Summer surprise: Marriage equality
This issue, perhaps more than any other, reflects Merkel’s calculated political flexibility. In early summer, a poll from public broadcaster ZDF revealed that 73 percent of Germans – and 64 percent of CDU voters – were in favor of affording gay couples the same marriage rights as straight couples. Merkel was always against it, although other parties, including the CDU’s junior coalition partners, the center-left Social Democrats (SPD), and the Greens were making the issue a precondition for forming a potential coalition after September’s general elections. Merkel changed her tune just days later, allowing MPs to vote their conscience, rather than down party line.
Marriage equality was passed on June 30. Merkel voted against it, giving her the ability to simultaneously remove the issue from the upcoming elections, and subsequent coalition talks, while still assuring her conservative party members that she had not surrendered her original position.
Reality check: Germany is for immigrants
The issue of whether Germany was a country that welcomed immigration was brushed under the table for decades. Merkel’s Christian Democrats were uncomfortable with that idea. Party consensus was that foreigners in Germany were and should be in the country as temporary guest workers only. It was a disconnect between political ideology and reality that persisted despite the fact that industrial, economic and demographic trends showed the country needed more people due to low birthrates. The nearly one-quarter of those living in Germany with an immigrant background was proof that Germany was, albeit unofficially, a country of immigrants – the most popular immigrant destination after the United States, in fact. Merkel took note of the changing times and recognized that reality, thus profiting from foreigner-friendly positions long held most of all by her left-leaning opposition.
The significance of ‘Islam is part of Germany’
That statement, with Merkel’s blessing, came from the CDU’s Christian Wulff in 2010, who was Germany’s president at the time. He was the highest ranking German official to recognize Islam’s presence in German society. The statement was hotly contested within the CDU. In backing Wulff’s comment, Merkel threw out another dearly held conservative position in favor of Germany’s left-leaning voters.
Refugees: ‘We can do this’
Perhaps Merkel’s most surprising political act was opening Germany’s doors to refugees, who then began arriving in large numbers in late 2015. Hundreds of thousands of people came to Germany, largely uncontrolled even though it was under the auspices of a chancellor leading the party that championed “law and order.” The German public was at first stunned, the left-leaning opposition was fascinated and many in the CDU were perplexed. Then Merkel flipped again, as state authorities found themselves overwhelmed and public support for “Willkommenskultur” (welcoming culture) was beginning to wane.
Merkel continues to object to a hard limit on refugees on constitutional grounds. However, she has since allowed asylum seekers from Afghanistan to be deported and concluded controversial refugee agreements with Turkey and other countries, which have resulted in a dramatic decrease in migrant flows into Europe.
Combating climate change
Merkel’s long-time focus on slowing climate change has gifted her the status of being a guardian of the environment. With polls showing strong support among German voters for curbing global warming, Merkel’s position has not only won her points at home, but also around the world, especially since President Donald Trump withdrew the US from the Paris Climate Accord. It is just one more issue dear to the hearts of the Greens that Merkel has been able to take on, helping her once again marginalize her opposition.