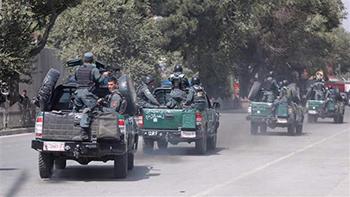 A bomb attack has struck near the US Embassy in the center of the Afghan capital, Kabul, killing five people, officials say.
Afghan officials said a bomber set off an explosive device outside a bank on Tuesday, at a time when many security forces personnel were expected to be collecting their salaries.

Nine other people were also wounded in the assault, according to reports.
Basir Mujahid, spokesman for the Kabul police chief, said the branch of Kabul Bank was likely the target of the attack, which took place not far from the US Embassy.
No group has claimed responsibility for the blast, but it bears the hallmarks of the Taliban militant group, which usually targets banks, especially towards the end of the month, or ahead of major holidays.