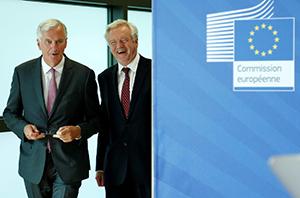 Gabriela Baczynska and Alastair Macdonald
BRUSSELS (Reuters) – The European Union’s chief negotiator Michel Barnier said on Monday he was concerned at the slow progress of Brexit talks, while his British counterpart David Davis called for “imagination and flexibility” to move on.

British officials arrived in Brussels on Monday hoping to push the EU toward talks about their post-Brexit ties, which the bloc refuses to launch until there is agreement on London’s exit bill and other pressing “divorce” matters, including the rights of EU citizens in Britain after March 2019.
“To be honest, I am concerned. Time passes quickly,” Barnier told reporters as he welcomed Davis back for a new round of talks. The third formal session since the process began in June, it is due to wind up on Thursday.
“We must start negotiating seriously,” Barnier said. “The sooner we remove the ambiguity, the sooner we will be in a position to discuss the future relationship.”
He welcomed a series of proposals London made over the summer break, but made clear they fell short of what EU leaders want to see before they will agree to open negotiations on the future free trade agreement the British government wants.
Impatient with the structure of talks agreed among the 27 other states and now binding Barnier’s negotiators, the British position papers made frequent reference to a future relationship with the EU rather than just the immediate task of bringing legal clarity for people and business when Britain leaves.
“The UK government has published a large number of papers covering important issues related to our withdrawal and our vision for a deep and special partnership,” Davis said.
“We want to lock in the points where we agree, unpick the areas where we disagree and make further progress on the whole range of issues,” he added.
To do that would require “flexibility and imagination from both sides”, he said.
But the EU wants to settle the major separation issues of ensuring expatriate rights, agreeing a divorce bill and squaring the circle of the future Irish border before jumping into talks about post-Brexit ties with London.
“The EU 27 and the European Parliament are united. They will not accept that separation issues are not addressed properly,” Barnier said. “I am ready to intensify negotiations over the coming weeks in order to advance.”
Britain’s Secretary of State for Exiting the European Union David Davis (L) and European Union’s chief Brexit negotiator Michel Barnier talk to the media, ahead of Brexit talks in Brussels, Belgium August 28, 2017.Francois Lenoir
British officials took a relaxed view of Barnier’s implied criticisms, noting it was a familiar line from the former French minister, and dismissed a suggestion talks were going badly.
NO BREAKTHROUGH EXPECTED
The EU has already signaled that the slow progress so far has made talks about a new accord with Britain less likely to start after an EU summit in October, as had been hoped.
The EU and Britain seem far apart on agreeing how much London should pay the bloc on departure to account for previous commitments.
The Irish issue is extremely delicate because of the history of political violence there, as well as the complex economic consequences of Brexit.
Dublin said on Monday much of the future border arrangements between Northern Ireland and Ireland could be solved before Brexit talks enter the next phase.
Neither side expects major breakthroughs this week in talks aimed at unraveling more than 40 years of union. Neither seems ready for major political concessions at this stage.
An EU official said it was “clearly worrying that we have major differences of core issues … with very little time to land all this, even if Britain moves”.
Britain’s opposition Labour Party on Sunday offered an alternative to the policy pursued by Conservative Prime Minister Theresa May by saying it would stay in the European single market for a transitional period after Brexit.
The British and German chambers of commerce together urged negotiators on Monday to start talks about future trading relations, and particularly customs arrangements, swiftly.
Writing in Le Monde in his native France, Barnier said the EU and Britain must remain allies for their common defense: “The Union of 27 and the United Kingdom will have to join forces to stand up to common threats,” he said.
“The security of our citizens cannot be haggled over.”
Additional reporting by Philip Blenkinsop and Jan Strupczewski; editing by Andrew Roche