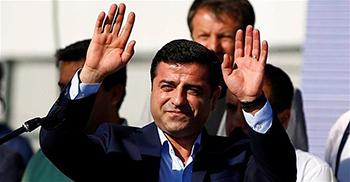 The Parliamentary Assembly of the Council of Europe “has made it clear that lifting the parliamentary immunity of a large number of MPs, especially members of the opposition [Peoples’ Democratic Party] HDP and [Republican People’s Party] CHP, followed by the prolonged detention of some of these members of parliament, is in direct violation of the respect accredited to elected parliamentarians of member states of the Council of Europe,” Kox said.

He particularly referred to Kurdish issue-focused HDP co-chair Selahattin Demirtaş, whose parliamentary immunity has been lifted and who has been in detention since early November 2016, and who is currently awaiting trial on “terrorism” charges.

Citing a block on Demirtaş communicating from prison with the HDP parliamentary group through the SEGBIS audio visual information system, Kox described the decision as “astonishing.”

“Although his parliamentary immunity has been lifted and he is being held in detention, [Demirtaş] is still a member of your Parliament, which should not unnecessarily obstruct the purpose of maintaining contact with [his] group peers and performing his parliamentary duties,” he said.

“We call once again on you to demand with us the immediate release of all members of your parliament who are currently held in detention,” he said.