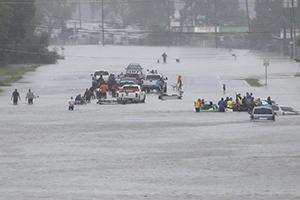 Refinery shutdowns from the storm helped push U.S. gasoline prices to 2015 highs of $1.7799 per gallon on Monday, although they receded slightly to $1.7320 per gallon by 0138 GMT on Tuesday.
U.S. West Texas Intermediate (WTI) crude futures rose 23 cents, or 0.5 percent, to $46.80 a barrel, after falling more than 2 percent in the previous session.
On international oil markets, Brent crude futures were up 20 cents or 0.4 percent, at $52.09 per barrel.
Massive floods caused by Harvey forced several refineries to close along the U.S. Gulf Coast, while heavy rains were spreading into the greater Houston area, which has already been hit by catastrophic flooding.
“Harvey’s downpours will continue over Texas and Louisiana and slowly drift northward through the end of August, exacerbating the unprecedented flooding disaster that continues to unfold,” said meteorological forecaster AccuWeather.
U.S. refiners have been affected more than oil producers by Harvey, which has now been downgraded to a tropical storm. Sources said Motiva will decide on Tuesday morning (local time) whether to shut the 603,000-barrel-per-day (bpd) Port Arthur refinery, the nation’s largest, because of flooding.
“Data available so far point to sizably larger refining than production disruptions,” U.S. bank Goldman Sachs said.
A damaged oil tank near Seadrift.Rick Wilking
“We roughly estimate that the impact of Harvey on the U.S. oil market would be to increase domestic crude availability by 1.4 million bpd while removing 615,000-785,000 bpd of gasoline and 700,000 of distillate supplies. Larger refinery outages would increase these long crude and short product impacts,” Goldman said.
“The shuttering of refining capacity in the Houston area will have a large impact on demand for crude for a while,” said Greg McKenna, chief market strategist at futures brokerage AxiTrader.
“That will see crude inventories build up in the U.S.,” he added.
The expected U.S. crude build-up on Tuesday widened the WTI discount to Brent to $5.64 per barrel, its widest in over two years.
Crude markets were also looking at disruptions in Libya and Colombia.
In Libya, the 120,000 bpd Zawiya oil refinery was working at only half its capacity due to the shutdown at the Sharara oilfield, according to a refinery source.
Sharara, which at 280,000 bpd is the OPEC member’s largest oilfield, has been shut for around a week due to militia blocking a pipeline linking it to the Zawiya oil terminal.
In Colombia, a bomb attack by leftist ELN rebel group has halted pumping operations along the country’s second-largest oil pipeline, the 210,000 bpd Cano-Limon Covenas, sources from the military and state oil company Ecopetrol said.
Reporting by Henning Gloystein; Editing by Richard Pullin