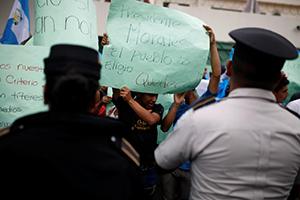 Reuters Staff
GUATEMALA CITY (Reuters) – Guatemalan President Jimmy Morales on Monday held back on his decision to expel the head of a United Nations-backed anti-graft unit who is investigating the leader’s campaign financing following a court ruling, criticism and protests.

Morales on Sunday declared Ivan Velasquez, head of the International Commission Against Impunity in Guatemala (CICIG), “persona non grata” and ordered him to leave the Central American country immediately. Hours later, the nation’s top court suspended the decision.
After two days of protests in the capital and criticism from the United States and European Union, there were signs Morales could backtrack on his initial insistence that he had the authority to expel Velasquez.
Morales did not withdraw his declaration that Velasquez was persona non grata in Guatemala, and the president appeared to be waiting for a final decision from the court in the coming days after Sunday’s provisional ruling.
Morales said on Monday on his official Facebook page that he would be “respectful of the decisions of the courts.”
His government could ask for a public audience before the court and seek a new vote, which he lost 3-2 in Sunday’s vote.
If Morales ignored the court, he could be found in contempt and risk losing his job, according to constitutional experts consulted by Reuters.
Demonstrators protest in support of Guatemalan President Jimmy Morales and his decision to expel Ivan Velasquez, head of the International Commission Against Impunity in Guatemala (CICIG) outside the CICIG headquarters in Guatemala City, Guatemala, August 28, 2017.Jose Cabezas
“Bring Jimmy Morales to justice!,” hundreds of students chanted in unison as they marched towards the presidential palace in downtown Guatemala City on Monday.
Velasquez, who previously investigated drug cartels and paramilitary groups in his homeland Colombia, was declared “persona non grata” days after the CICIG said Morales should be investigated over alleged illicit funding in his election run.
With powers to prepare crime and corruption cases, the CICIG was in 2015 instrumental in removing from office former Guatemalan president Otto Perez after identifying him as a key player in an alleged multi-million-dollar corruption racket.
The CICIG has been strongly backed by western powers.
U.S. Ambassador to Guatemala Todd Robinson told Reuters that Morales was putting at risk U.S. aid to fight poverty and crime in the poor Central American country, which has seen a surge of illegal migration to the United States in recent years.
“There will probably be consequences from the president’s decision,” Robinson said.
The European Union said the decision to declare Velasquez persona non grata put at great risk the work initiated by the CICIG on strengthening the rule of law in Guatemala.
Morales, a former comedian, won election in late 2015 after riding a wave of public discontent over the corruption scandals that brought down his predecessor Perez.
Reporting by Enrique Andres Pretel and Sofia Menchu; Additional reporting by Luis Echeverria; Writing by Anthony Esposito; Editing by Andrew Hay