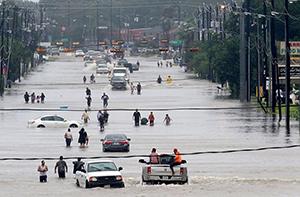 While the city has battled some of the nation’s worst deluges, elected officials, meteorologists and emergency managers say it’s never faced anything like the current record floods, which may worsen as the downpour is expected to last for days. Volunteers joined efforts by emergency teams Sunday night, while thousands of people fled to rooftops and higher ground to avoid the aftermath of the storm, which has so far been blamed for at least two deaths, according to the Associated Press.
“Words really can’t express the impacts this will have, when all is said and done,” said Todd Crawford, chief meteorologist at The Weather Company in Andover, Massachusetts. “There is no historical comparison. It is simply a tragedy of epic proportions.”
After smashing ashore Friday as the strongest storm to hit the U.S. since 2004, rains and flooding from the slowed cyclone had become the biggest threat. More than 30 inches have fallen in some areas and as much as 50 inches are expected over the upper Texas coast including the Houston and Galveston metropolitan region, the National Hurricane Center said in an advisory at about 5 a.m. New York time Monday.
As much as 15 inches of rain are expected in an area stretching south to the middle Texas coast, west toward Texas Hill Country, around Austin, and east across south-central Louisiana, the center said.
About one quarter of oil and natural gas production in the Gulf of Mexico and more than 10 percent of U.S. refining capacity has been shuttered. Crops, livestock and drinking water are also under threat and rail shipments near Houston have been delayed. Airlines canceled almost 1,848 flights Sunday at airports in Houston, Corpus Christi, San Antonio, Austin and Dallas, and another 1,652 were scrubbed for Monday, according to FlightAware, an airline-tracking service.

“It is very bad flooding, rivaling the Katrina disaster in some cases,” Brett Rossio, a meteorologist with AccuWeather Inc. in State College, Pennsylvania, said by phone, referring to the 2005 disaster centered in neighboring Louisiana. “Some places will get greater than 30 inches; this is very deep, tropical moisture that is lifting northward.”
Harvey, which had stalled northwest of Victoria, Texas, started to drift back toward the Gulf of Mexico, the hurricane center said. The worst-case scenario is if it re-intensifies Monday into Tuesday before swinging back into the southeastern Texas coast, Rossio said. While the storm may intensify slightly as it moves back over water, the hurricane center said it’s not forecasting significant strengthening. It’s forecast to move off the central Texas coast Monday morning and remain just offshore through Tuesday, the center said.

At least 19 points across southeastern Texas were expected to set flooding records, said Greg Waller, a service coordination hydrologist with the National Weather Service in Fort Worth, Texas. Buffalo Bayou, a waterway that runs through downtown Houston, broke its old flood record Sunday morning and was forecast to stay above that mark until Wednesday.
Major roadways in Houston had flooded by Sunday morning, some under several feet of water, while motorists were stranded on freeways for hours because off-ramps are inundated. Mayor Sylvester Turner opened the city’s downtown convention center to residents left homeless by the storm, while the city’s police urged residents to stay in their houses if they faced only manageable levels of flooding.