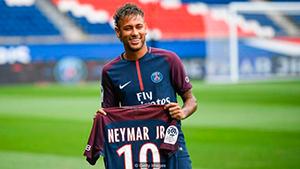 Every summer, enormous amounts of money change hands as top football clubs vie for the best players. Here’s a rundown of how it all works.
By Miriam Quick

Each summer, hundreds of millions of dollars change hands as the world’s top football clubs vie for the best players for the coming seasons. But what actually is a transfer, and how does it work?
Why should I care?
There’s crazy money in it. Brazilian superstar Neymar recently moved from Barcelona to Paris Saint-Germain for 222 million euros ($265 million). This is more than double the previous record of 105m euros ($125m), paid for French player Paul Pogba. And that was only set last year. There’s no cap on how much a team can spend on players. So where does it end?
What is it?
Football is a global marketplace and top players relocate constantly. David Beckham, for example, played for clubs in the UK, Spain, US, Italy and France over the course of his career. Professional players sign contracts with clubs for a fixed term of up to five years. If a player transfers before their contract expires, the new club pays compensation to the old one. This is known as a transfer fee.
When do transfers happen?
Twice a year. FIFA regulations set out two annual periods during which clubs can buy in foreign players, known as transfer windows. The longer transfer window falls between seasons and the shorter one falls mid-season, but the exact timing is set by individual countries’ football associations. In many European countries the summer transfer window closes on August 31. In the US it closed on August 9.
Is that it?
No. The player, their agent, the club and all their lawyers must thrash out a new contract. This includes details of salaries and bonuses, such as signing-on and loyalty bonuses. Players also undergo medical examinations to check they are fit to play. If this reveals previously undetected injuries, it can affect the size of the transfer fee.
Who gets the money?
That 222m-euro sum doesn’t get paid to Neymar. PSG paid it to FC Barcelona to secure his services. Technically speaking, they paid the buyout clause in Neymar’s old Barcelona contract, which was set at 222m euros. Neymar’s father, agent and others will share a 38m euro ($45m) payment for facilitating the move, according to some reports.
PSG will then pay Neymar’s wages – around 45m euros ($54m) a year before tax – and hope to make a profit off his name and image. Image rights can be a big sticking point when negotiating contracts. Clubs generally demand the exclusive right to control how images of the player appear in advertising and publicity. But players are reluctant to give up lucrative opportunities to earn ad revenue. So all parties must strike a deal – for example, the proceeds from using the player’s image are to be split 50/50 between player and club.
With Neymar, it gets even more complex. Barcelona have said they intend to sue him for breach of contract, because he received money as part of a renewal bonus when he signed a new contract last year. The Spanish club is demanding 8.5m euros ($10.1m) in damages, plus the return of an undisclosed bonus and a further 10% of that amount in interest.
Where does the money come from?
There is serious cash in football. The 20 richest clubs globally – all European – earned 7.4 billion euros ($8.9 billion) in revenue in 2015/16, according to analysis by Deloitte. The top earning club was Manchester United, clocking up 689m euros. Commercial sources such as sponsorship and merchandise accounted for 43% of revenue – the biggest slice. So expect lots of PSG Neymar shirts. Selling broadcast rights accounted for 39%, but ticket sales for only around 18%. These figures exclude transfer fees, but clubs can also make money by selling players.
Hasn’t there always been silly money in football?
Not as much as there is now. Before 1995, many European clubs had quotas on foreign players. The Bosman ruling of that year banned limits on players from within the EU, opening up a competitive international market. Transfer fees began to ramp up, as did the number of foreign players. By 2016, nearly 70% of English Premier League footballers were expats.
Today the top clubs keep getting wealthier. Burgeoning TV revenues are one reason why. In 2016, the 20 Premier League clubs signed a three-year, £10.4bn ($13.4bn) deal with broadcasters. This was the most lucrative television deal ever signed in professional football. In the UK, BT and Sky now pay the Premier League more than £10m ($12.9m) to screen each game.
This extra spending power is filtering through into higher transfer fees. Clubs spent more money than ever on international transfers last year. A record $4.79 billion was spent on 14,591 deals globally in 2016, according to FIFA – or around $328,000 per average deal.
Does any of this matter?
Some argue high transfer fees are bad for the game. FIFPro, the footballers’ union, called the Neymar transfer ‘anti-competitive’. “Football is ever more the domain of a select group of rich, mostly European-based clubs,” FIFPro general secretary Theo van Seggelen claimed in a recent statement. Escalating transfer fees have “helped to destroy competitive balance”, he said, because only a few top clubs – such as Manchester United, Real Madrid or Bayern Munich – can afford to buy elite players. They then dominate the leagues, whereas poorer clubs don’t.
But FIFA data shows that high transfer fees are far from universal. In fact, only 14% of all worldwide transfers last year involved the payment of a fee. The rest were free transfers – where a player’s contract expires and they move on.
Could another player break Neymar’s record?
Lionel Messi has a 300m-euro ($358m) buyout clause in his contract with Barcelona. Neymar’s record doesn’t look safe for long.