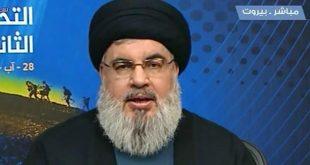 Hizbullah chief Sayyed Hassan Nasrallah on Monday hit back over accusations that he had sought to “blackmail” the Lebanese government over the file of the Islamic State-held troops, while describing August 28 as Lebanon’s “second Liberation Day.”

“After the end of my previous speech, quick responses alleged that Hizbullah was blackmailing the Lebanese people and the families of the soldiers with the aim of imposing coordination with Syria,” said Nasrallah in a televised address.
“It is not Hizbullah that can be accused of blackmail in a humanitarian file,” Nasrallah stressed.
His remarks come a day after the remains of seven Lebanese soldiers executed by IS were recovered by Lebanese authorities as part of an agreement led by Hizbullah. The agreement followed separate but simultaneous assaults by Hizbullah and the Lebanese and Syrian armies on both sides of the border.
The IS fighters who surrendered on both fronts were allowed to leave with their families to Syria’s Deir Ezzor province as part of a deal that also involved the handover of a Hizbullah captive and bodies belonging to slain Hizbullah fighters.
Turning to “voices demanding a trial for the evacuated IS terrorists,” Nasrallah said: “We understand the sentiments of these people, but some parties are seeking to distort this victory, the same as they had previously tried to distort the liberation of Arsal’s outskirts.”
He called for “interrogating those who left the soldiers in Daesh’s hands” instead of pressuring “the side that unveiled their fate,” using IS’ Arabic acronym.
Nasrallah also called for holding accountable Lebanese parties that had “prevented the Lebanese army” from liberating the troops in the past.
“The army had the ability to besiege Daesh and free the captive troops,” Hizbullah’s leader underlined, accusing some politicians of “cowardice and submission.”
He added: “The battle has ended with the accomplishment of all objectives — ousting Daesh from Lebanese territory, unveiling the fate of the troops, and liberating the (Lebanese) border and Syria’s Qalamun.”
Nasrallah also revealed that Hizbullah lost 18 fighters in the battle for Syria’s Qalamun while the Syrian army lost seven soldiers.
As for the battle on the Lebanese side, Nasrallah said: “We are before very great and huge victory. The issue is not the liberation of 140 square kilometers of Lebanese territory but rather the liberation of the entire Lebanese soil from terrorists.”
“August 28, 2017 is the date of the second liberation and it was written with the blood of the Lebanese army, the Syrian and the Resistance… It will go down in the history of Lebanon and the region, regardless whether the Lebanese government recognizes it or not,” Nasrallah went on to say.
Timeline
• 9 hours ago
Nasrallah: August 28, 2017 is the “second Liberation Day,” regardless whether the Lebanese government recognizes it or not.
• 10 hours ago
Nasrallah: From the beginning of the battle, Daesh had been seeking a ceasefire… When Daesh found itself cornered in the last square, it collapsed and surrendered and it accepted the agreement in the last hours before the threatened military action.
• 10 hours ago
Nasrallah: We had suggested that the Lebanese state carry out the negotiations and Syria confirmed that it would facilitate the issue. We sought to take advantage of time and we reached this result. It is not Hizbullah that resorts to blackmail over a humanitarian file. Those who claimed that were either ignorant or they lack any ethics.
• 10 hours ago
Nasrallah: Statements claiming that Hizbullah was blackmailing the Lebanese army and state over the file of the captive troops have been issued… Those who commented did not hear my speech or it reached them taken out of its context.
• 10 hours ago
Nasrallah: I understand the angry responses to my latest speech about the anti-IS battle, and we’ve been used to such remarks since the year 2000. There is a point related to Hizbullah’s credibility and this is something that we cannot take lightly.
• 10 hours ago
Hizbullah chief Sayyed Hassan Nasrallah in televised speech: I offer my warmest condolences to the families of the martyrs – the families of the martyrs of the army and the soldiers who were kidnapped by Daesh several years ago, while awaiting the final confirmation on the file of the bodies. I also salute the families of the martyrs of the Lebanese army, the Syrian army and the resistance.