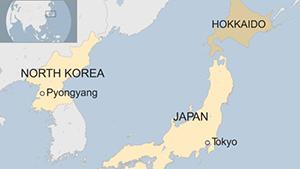 North Korea has fired a missile over northern Japan in a move Japanese Prime Minister Shinzo Abe called an “unprecedented” threat to his country.

The missile, launched early on Tuesday Korean time, flew over Hokkaido island before crashing into the sea.
The UN Security Council is expected to hold an emergency meeting in response.
North Korea has conducted a flurry of missile tests in recent months but firing projectiles over Japan is rare and sharply escalates tensions.
On the two previous occasions North Korea fired rockets over Japan – in 1998 and 2009 – the North claimed they were for satellite launches, not weapons.
The South Korean military said the missile was fired eastward just before 06:00 local time (21:00 GMT) from near the North’s capital, Pyongyang – which is rare.
Early analysis of the launch suggests the missile:
• flew a distance of more than 2,700km (1,678 miles)
• reached a maximum altitude of about 550km (342 miles), lower than most previous North Korean missiles
• fell into the North Pacific Ocean 1,180km off the Japanese coast after breaking into three pieces
No effort was made by the Japanese to shoot down the missile but it issued a safety warning telling citizens in Hokkaido to take shelter in “a sturdy building or basement”.
US and Japanese forces are currently taking part in training drills in Hokkaido.
South Korean President Moon Jae-in ordered a show of “overwhelming” force in response to the launch. Four South Korean jets staged a live bombing drill on Tuesday.
Mr Abe said he had spoken to US President Donald Trump and that both agreed to increase pressure on North Korea.
Over the past week it seemed as though the rhetoric from North Korea had abated. There was less fiery commentary from the country’s media than we’d seen in preceding weeks.
But the latest missile launch will certainly dispel any notions that Pyongyang is backing down, even though there’s been international condemnation and UN sanctions passed against it.
In some ways, a provocation was expected as US and South Korean forces are currently conducting joint military exercises. These drills are held every August, and there’s always some retaliation to them from North Korea. Last year, Pyongyang conducted a nuclear test shortly after the exercises.
But few North Korea watchers expected an overt missile test over Japanese territory – especially over the north, as previous threats on Guam would take missiles over the south of Japan.
Mr Abe called the launch an “outrageous act” and an “unprecedented, serious and grave threat [that] greatly damages regional peace and security”.
He said his government was doing its utmost to protect people’s lives.
Skip Twitter post by @Chihokomoriya
Alarm from JP Gov. “A missile was fired from North Korea. Please evacuate to a sturdy building or basement.” #northkorea #Japan pic.twitter.com/38NNCteqY2
— Chiho komoriya (@Chihokomoriya) August 28, 2017
Report
End of Twitter post by @Chihokomoriya
North Korea’s conventional and nuclear weapons programmes are a breach of international sanctions, so the test is being seen as a major provocation and an escalation of tensions on the Korean peninsula.
Earlier this month, North Korea threatened to fire missiles towards the US Pacific territory of Guam, while US President Donald Trump warned Pyongyang would face “fire and fury” if it continued to threaten the US.
There have also been some reports in recent months that North Korea is preparing to carry out its sixth nuclear test.
But last week, US Secretary of State Rex Tillerson said the fact that North Korea had not carried out any missile launches since the UN imposed a fresh round of sanctions was an indication of restraint by Pyongyang.
In other reaction:
• A meeting of South Korea’s National Security Council (NSC) was convened to discuss the issue, Yonhap reported.
• British Foreign Secretary Boris Johnson expressed “outrage” at North Korea’s “reckless provocation”.
• Australia has condemned the launch as a “provocative, dangerous, destabilising and threatening act”.
• The Pentagon said that Tuesday’s test did not represent a threat to the US and the military was now working to gather more intelligence about it.