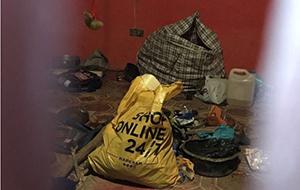 By Nomsa Maseko- BBC News, Shayamoya village
Fear has gripped the village of Shayamoya in South Africa’s KwaZulu-Natal province after the discovery of a decapitated body.

The family of Zanele Hlatshwayo, 25, who has been missing since July, believe she was a victim of a cannibalism ring that has so far led to the arrest of five men.
Her decomposing body was found after a man who claimed to be a traditional healer handed himself over to police last week and confessed that he was tired of eating human flesh.
Police officers had initially dismissed his statement, according to reports.
It is only after he produced a bloodied hand and foot as proof that he was immediately arrested. He led them to his rented home, where police found eight human ears in a cooking pot.
It is believed they were to be served to his customers, who were told they had magic properties and would convey money, power and protection.
Several other body parts were found stuffed in a suitcase.
Ms Hlatshwayo’s bloodied and torn clothes were found among the human remains in the traditional healer’s home.
The clothes were identified by her family.
However, police are still waiting for DNA test results to confirm if the remains belong to the mother of a two-year-old boy.
Ms Hlatshwayo’s family is yet to bury her. As I entered the Hlatshwayo homestead, I was greeted by a solemn hymn and the cries by the grieving family.
“We can only imagine how she begged for her life, she died an extremely painful death,” said her elder sister Nozipho Ntelele as she wiped away tears.
“Her clothes were covered in grass and dust, which is a clear indication that she had been in a struggle to save her life,” said Ms Ntelele.
The traditional healer lived in a rented hut in Rensburgdrift near Escourt.
He is nicknamed “Mkhonyovu” which loosely translated means “the corrupt one or corruption” in the local Zulu language.
He rented the hut from Philani Magubane, whose brother was also arrested for being the traditional healer’s alleged accomplice.
“I was shocked to find out that my younger brother fell for the traditional healer’s fairytales – he promised them wealth when he was just as poor as I am,” Mr Magubane told me.
He said that one his tenants had been complaining about the smell of rotting meat that was coming from his next door neighbour.
“Mkhonyovu only moved into the house two months ago – I had no idea that he kept human remains here because I don’t live in the same yard,” said Mr Magubane.
Mr Magubane said he believes that his brother, along with three other young men, were lured by the traditional healer to work for him as they had been struggling to find jobs.
It is alleged that he sent the young men to dig graves in the middle of the night so he could make magic charms known locally as “muti”.
Mthembeni Majola, a local politician, convened a community meeting shortly after the cannibalism suspects made their first court appearance last week.
Image caption Mthembeni Majola said some villagers had willingly eaten human flesh
“Most residents were shocked by this and now live in fear,” but Mr Majola says others were not surprised.
“A few confessed to have consulted with the traditional healer and knowingly ate human flesh,” he said.
“But what has angered most of us here is how gullible our people have become,” saying that Mkhonyovu’s customers were livestock thieves who were told he could make them invincible, even bulletproof, so that the police could not shoot them, said Mr Majola.
Phepsile Maseko, from South Africa’s Traditional Healer’s Organisation, has condemned the alleged cannibalism practices.
She said “Mkhonyovu” that was a fake healer who wanted to enrich himself and had brought “our sacred practices into disrepute”.
“Ritual killings and the use of human tissue are not part of traditional healing… this angers us as traditional healers because we have to constantly defend our honest work,” said Ms Maseko.
The five men, who were arraigned in court on Monday, amid public protests outside the courtroom, abandoned their bail request and will make another court appearance at the end of September.