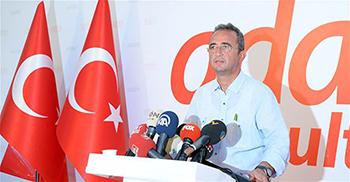 Three party members who consumed alcohol at the main opposition Republican People’s Party’s (CHP) “justice congress,” ongoing at the historic site of the Battle of Gallipoli in the western Turkish province of Çanakkale, will be expelled from the party, spokesperson Bülent Tezcan has stated.

In a written statement on Aug. 27, Tezcan said the party had previously included a list of 12 camping rules for the congress at the Eceabat Kocadere campsite, underlining the historic significance of the venue.

However, images of party members consuming alcohol at the site have circulated in media outlets and on social media, which Tezcan said contradicted with the spirit of the event.

“Three people determined to have consumed alcohol were immediately taken from the campsite and banned from reentering the site. Their expulsion process from the party has also begun, and their names will be reported to the authorized institutions from tomorrow [Aug. 28],” he stated.

“Without doubt, such impertinent behavior is completely against the glorious memory of our Gallipoli martyrs and the spirit of the justice congress. It has deeply wounded thousands of our citizens attending the congress with great labor, difficulties and sacrifice,” Tezcan said.

The ongoing four-day congress comes after the CHP carried out a 450-day “justice march” from the capital Ankara to Istanbul, where it then held a huge “justice rally” on July 9. The march was initiated after CHP Istanbul deputy Enis Berberoğlu was sentenced to 25 years in prison on June 14 on charges of providing daily Cumhuriyet with video footage purporting to show weapons-loaded National Intelligence Agency (MİT) trucks heading to Syria.

The congress has brought together more than 700 speakers in eight main panels on justice in courts, daily life, education, religion, media, elections, and the economy. It will continue until Aug. 30.