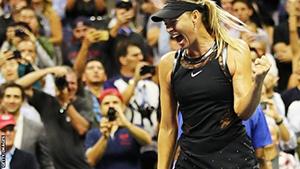 By Piers Newbery-BBC Sport at Flushing Meadows
Maria Sharapova made a dramatic return to Grand Slam action by knocking out world number two Simona Halep at the US Open.

The Russian won 6-4 4-6 6-3 in front of a sell-out night session crowd of almost 24,000 people in New York.
Sharapova, 30, was playing her first Grand Slam match since serving a 15-month doping suspension.
The 2006 champion needed a wildcard to enter the main draw as she is currently ranked 146th.
When her name was drawn alongside Halep’s in the first round it set up a contest that felt more like a Grand Slam decider than opener.
Over the course of two hours and 44 minutes, Sharapova’s greater pace off the racquet outstripped Halep’s speed of foot, with 60 winners proving decisive despite 64 errors.
“You never know what you’re going to feel until you win that match point, but everything you go through is worth it for this moment,” said Sharapova, who now has a 7-0 record against Halep.
“You sometimes wonder why you put in all the work, and this is exactly why.”
Sharapova goes on to face Hungary’s Timea Babos, the world number 59, in round two on Wednesday.
Simona Halep was beaten in the French Open final in June and lost in the Wimbledon quarter-finals to Johanna Konta
Sharapova returned from her ban in April but has struggled with thigh and forearm injuries, playing just once since May, and was also refused a wildcard by the French Open.
The United States Tennis Association took a different view, handing the Russian a place in the main draw in New York, and she took full advantage.
John McEnroe had been among those wondering whether the Flushing Meadows crowd would react badly to the 2006 champion, but she was given a warm reception as she stepped on court.
It was Sharapova’s first appearance at a Grand Slam since she lost to Serena Williams in the 2016 Australian Open quarter-final – and she relished returning to the big stage.
“It’s prime-time baby – I love it,” she joked afterwards. “I embrace every moment of it and I love it.”
Halep has three times been on the brink of the number one ranking this year, and was match-tight after playing 12 times on North American hard courts over the last month, but in the end she was overpowered by Sharapova.
The five-time Grand Slam champion edged ahead in a gripping first four games that lasted 27 minutes, and a blizzard of winners brought her the first set.

Impress you much? Shania Twain performed at the US Open opening ceremony, before the start of the night session
The same fierce hitting seemed like carrying Sharapova all the way at 4-1 up in the second, but Halep recovered with five straight games to level.
With the error-count growing, it appeared that Sharapova was running out of gas, but after a six-minute bathroom break she returned rejuvenated for the decider.
Once again she raced ahead, building another 4-1 lead, and this time she would not be pegged back.
Halep had saved a remarkable 17 of 22 break points but could only find the net when given a chance to get back on terms, and Sharapova edged home in a dramatic closing game, dropping to her knees in celebration.
“This girl has a lot of grit and she is not going anywhere,” added Sharapova.
There were smiles and tears as Sharapova celebrated a spectacular win on her first Grand Slam appearance for 19 months.
The 2006 champion’s lack of match practice looked as if it would cost her when she let slip a 6-4 4-1 advantage, but she maintained the aggression in the deciding set and her nerve steadied.
Sharapova was able to dictate the course of the match against the world number two: whatever the rights and wrongs of her being awarded a wildcard by the USTA, this was a magnificent effort and an exceptional match.