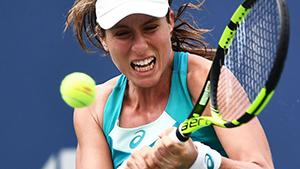 Johanna Konta’s US Open hopes are over after she suffered a shock loss to Serbia’s Aleksandra Krunic in the opening round on Monday.

After Andy Murray’s withdrawal, Britain’s hopes predominantly rested on the shoulders of the world number seven.

Konta’s brilliant run to the semi-finals of Wimbledon marked her out as a contender for the title in New York on her favoured hard courts and she went into the tournament as one of eight players in the race to be world number one.

Konta, who made the fourth round the last two years, eased into a 4-1 lead in the first set on a sleepy Grandstand court and although Krunic pulled back level at 4-4, she was able to break again before serving out the set.

But there was no fluency from the 26-year-old and, as her first-serve percentage dipped well below 50, Krunic began to take control and win the next two sets.

She said: “It’s definitely not an easy loss to take. I would have liked to have been involved here for much longer. I don’t take anything for granted. I think it would be quite obnoxious of me to come in here expecting I have a right to be in the second week. I had an incredible Wimbledon experience, but I have moved on since then.”

Heather Watson failed to end her miserable run of results at the US Open as she lost a seventh successive first-round match to Alize Cornet.

The British number two insisted ahead of the tournament that the sequence was simply coincidence rather than anything to do with the courts or the event.

Indeed, Watson won the junior tournament in 2009 but has not managed a single victory in the seniors.

This match was a frustrating one for the 25-year-old, who paid for poor starts in both sets and fell to a 6-4 6-4 defeat.

With Andy Murray forced to pull out due to injury last week, Kyle Edmund is now Britain’s only realistic hope to go far at Flushing Meadows and he opened his campaign in impressive fashion with a straight-sets first-round victory over seeded Dutchman Robin Haase.

British number two Edmund, full of confidence after reaching the semi-finals at the Winston-Salem Open last week, won 6-3 7-5 6-3 in under two hours and will now play American Steve Johnson for a place in the third round.

Edmund is a 150/1 shot to lift the trophy in a market headed by the likes of Roger Federer, Rafael Nadal, Alexander Zverev, Grigor Dimitrov and Marin Cilic.

Meanwhile, British number five Cameron Norrie marked his US Open debut with an easy win over Russian Dmitry Tursunov who retired at the start of the third set because of a knee injury with his opponent two sets ahead and cruising.

Johannesburg-born Norrie, from Fort William, won a tight opening set on Court 14 on the tie-break before racing to a 6-1 score in the second when his opponent pulled out.