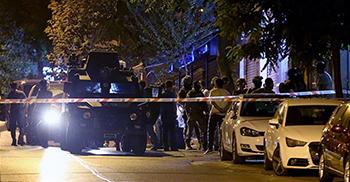 A total of 648 suspected members of the Islamic State of Iraq and the Levant (ISIL) were detained and 282 were later arrested in 117 operations targeting the jihadist group in Istanbul over the past year, according to police data.

According to data compiled from the statistics of the Istanbul security general directorate, counter-terrorism police conducted a total of 117 operations against the jihadist group across the city between Aug. 15, 2016 and Aug. 15, 2017.

Some 67 suspects who were detained during the operations but were sought for different crimes were transferred to the related police departments, the police stated.

One suspect who resisted surrendering to security forces was “neutralized,” according to the police information.

Over the same period, security officers also conducted strict anti-terror security checks at the city’s main Atatürk Airport, the Sabiha Gökçen Airport on the Asian side and the main bus terminal to apprehend suspected “foreign fighters.”

Police conducted security checks on a total of 14,555 people at Atatürk Airport and another 13,053 people at the Sabiha Gökçen Airport over the past year. Some 15,442 suspected passengers were also checked at the main bus terminal in Istanbul’s Esenler district.

Of those who were subjected to security checks, 940 people were deported, according to police figures.

In addition, anti-terror units foiled a number of attacks targeting the city by ISIL over the past year.

Accordingly, one ISIL militant, only identified by the initials S.S., was apprehended on Nov. 20, 2016 in the Sancaktepe district. He had reportedly been preparing for attacks and had previously scouted around the parliament building in the capital Ankara and mosques of Turkey’s Caferi Shiite minority.

In another operation, police determined that an ISIL member, identified only by the initials H.B., who had been detained in the Güngören district on Aug. 27, 2016, had been preparing to stage attacks on a bookstore selling books about Christianity on İstiklal Avenue, the nearby Vatan Party headquarters and a police checkpoint.

Another six ISIL militants apprehended on March 23 in the Kadıköy district had reportedly been scouting at the addresses belonging to Muslim evangelist “Cübbeli Ahmet Hoca” for attacks.

In the Pendik district, four Tajikistan-origin suspects apprehended on Sept. 17, 2016 had been preparing attacks targeting NATO bases in the southern province of Adana and the Central Anatolian province of Konya on behalf of the jihadist group.

Two Tajikistan -origin ISIL suspects, identified only by the initials A.S. and B.F.K., were also apprehended in Istanbul while preparing for attacks on some “critical spots” across the city.

In a recent operation on Aug. 15, two ISIL members, identified only as M.A. and A.Z., who had been sought by the Interpol on “being a member of terror organization,” were apprehended in the Fatih district, police information stated.

Separately, police in the Aegean province of İzmir detained six ISIL suspects on Aug. 29 during simultaneous raids across the city. Police also seized a number of organizational documents and materials during searches at the addresses.

Three of the suspects were of Syrian origins, according to media reports.

On Aug. 28, a court in the southern province of Hatay ordered the arrest of four ISIL suspects on charges of “membership of an armed terror organization.” They had been detained in an operation 10 days before.

Two Turkish-origin and two Syrian-origin ISIL suspects inside a suspicious car had been detained during a road check in the Antakya-İskenderun motorway on Aug. 19.

Another ISIL militant inside the car was shot after attacking police but later succumbed to his wounds in hospital.