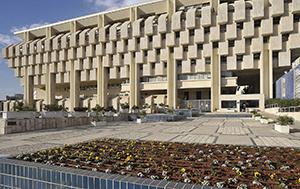 The central bank left its benchmark interest rate at 0.1 percent, as predicted by all 18 economists surveyed by Bloomberg.
“The Bank of Israel position of holding and waiting will last a very long time,” said Ori Greenfeld, chief economist of Psagot Investment House Ltd. in Tel Aviv. “It’s a very comfortable situation for the Israeli market: The economy looks good, unemployment is at an all-time low and the interest rate doesn’t have to go up since inflation is low for the best reason we can have – competition getting stronger and the government taking some steps to push the cost of living down.”
After a brief period of increase, inflation has dipped back below zero in recent months, suggesting to economists and investors that the central bank will stay on hold for the rest of this year and maybe even the next. Israel’s gross domestic product grew 2.7 percent in the second quarter, falling short of analyst expectations, and July inflation also missed estimates, with prices declining 0.7 percent from a year earlier.
Weakening Shekel
The central bank in recent months has emphasized that it’s in no rush to raise rates, especially if inflation remains below its 1 percent to 3 percent target. The shekel has weakened in recent weeks as investors bet that with inflation so low, the central bank is delaying any move toward tightening.
In its statement accompanying the decision, the central bank said it would keep policy accommodative for “as long as necessary” to entrench inflation within the target range. Growth of goods exports remains low but services exports are strong, the bank said, while the economy has continued growing at about the same pace this quarter as in the previous one.
The central bank said recent weakness in the shekel, which has declined 3.2 percent against a basket of currencies since the bank’s last rate decision in early July, could help support inflation.
The bank’s statement “was less optimistic than its previous announcement,” which came before the July inflation surprise and disappointing GDP figure, said Rafi Gozlan, chief economist at Israel Brokerage & Investments Ltd. in Tel Aviv. “Instead of optimism about inflation, a return to the target now looks very, very distant. That’s the main story.”