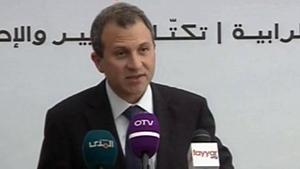 Free Patriotic Movement chief Jebran Bassil on Tuesday called for the removal of any “terror hubs” in the country’s Palestinian and Syrian refugee camps, as he said that parties that “allowed terrorism in the past must shut up today.”

“We must benefit from the border victory to reject the persistence of terror hubs in (Palestinian) refugee camps and the gatherings of the displaced (Syrians), topped by the challenge of the Ain el-Hilweh camp,” said Bassil after the weekly meeting of the Change and Reform bloc.

He was referring to separate but simultaneous anti-IS assaults by Hizbullah and the Lebanese and Syrian armies on both sides of the border that ended with the surrender and withdrawal of Islamic State terrorists entrenched in the border region.

“The scheme of terrorism in Lebanon has fallen and the displacement and naturalization schemes should fall next,” Bassil added.

Referring to IS’ execution of abducted Lebanese troops, Bassil reminded the Lebanese that “the soldiers were martyred due to inaction and negligence over what happened in the year 2014.”

The suspected remains of eight troops were recovered Sunday by Lebanese authorities and the body of a suspected soldier was retrieved on Tuesday. The bodies were located as part of a Hizbullah-led deal with IS. The troops were among around 30 Lebanese servicemen abducted by IS and al-Nusra Front during the 2014 invasion of the border town of Arsal.

“Those who allowed terrorism in the past must shut up today, and let them atone for their sins by contributing to a solution to the refugee crisis,” Bassil went on to say.

“Our stance in Cabinet in 2014 was clear when we rejected an illegal term extension. Do Lebanese realize now why we were calling for the appointment of a new army commander?” Bassil added.

“Let Lebanon get stronger by standing by the strong president and the capable army instead of fabricating stories about allowing the terrorists to flee,” the FPM chief urged.

“Some are trying to give the impression that Daesh (IS) and al-Nusra were created by Hizbullah, but the response is the acknowledgment by top (foreign) officials that some Western and Middle Eastern countries were supporting the extremists,” Bassil added.

The political scene in Lebanon is witnessing major controversy over the latest developments on the eastern border, especially after Hizbullah was accused of facilitating a smooth exit for IS’ militants from the border region.

Some parties are decrying that “IS’ militants were allowed to escape punishment over the murder of the soldiers,” while others are criticizing certain parties in Tammam Salam’s government for “preventing the army from continuing the battle and liberating the troops in 2014.”

Hizbullah, the FPM and some of their allies have criticized Salam’s government, al-Mustaqbal Movement and former army chief Jean Qahwaji over the 2014 clashes, accusing them of ordering a premature halt to the fighting that allowed the militants to abduct around 30 Lebanese troops and policemen to the outskirts of the border town of Arsal.
Lebanon