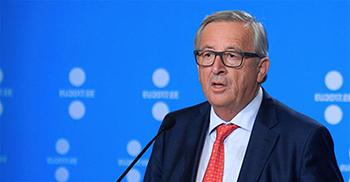 European Commission President Jean-Claude Juncker on Aug. 29 said Turkey was to blame for the breakdown of its EU accession talks and warned Ankara was fast “withdrawing from Europe.”

Juncker warned that “Turkey is withdrawing from Europe with giant steps,” adding that it was up to President Recep Tayyip Erdoğan to officially call an end Turkey’s efforts to join the EU.

He said he suspected that Erdoğan was hoping that Europe would be the one to break off the talks “in order to blame the European Union” for their failure.

But the bloc must avoid “falling into the trap” as the “responsibility is entirely on the Turkish side,” Juncker told an annual conference of EU ambassadors in Brussels.

“The question is to know if we must put an end to the negotiations, which is a purely theoretical question as there are no negotiations,” he said.

Ties between Ankara and Brussels have worsened in recent months over a range of issues, stoking calls for Turkey’s EU accession talks to be suspended.

The country began formal membership talks in 2005 but progress has been slow and the negotiations came to a virtual halt last year after the failed coup attempt.

Amid a bitter ongoing war of words especially between Ankara and Berlin, German Foreign Minister Sigmar Gabriel recently said Turkey will “never join the EU as long as it is governed by Erdoğan.”

Gabriel’s remarks were slammed by Ankara, with Prime Minister Binali Yıldırım saying he “should mind his own business … and not try to put Turkey in line.”