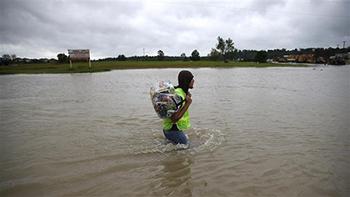 Hurricane Harvey has so far claimed the lives of at least 30 people in the United States with reports showing the storm will make another landfall in hours.
Local officials announced Tuesday that the death toll did not include the number of unconfirmed flood-related deaths as water was still rising in most of the affected areas.
Forecasters predicted that the tropical storm will make another landfall near the Texas-Louisiana state line sometime shortly after midnight central time.

Texas officials said an estimated 30,000 people could be evacuated due to flooding and over 725,000 people were already under a mandatory evacuation order.
Harvey has set a new rainfall record for the US, dumping 51.88 inches (132 centimeters) of rain in Cedar Bayou, which a salt water channel on the Texas coast, officials said.
“This reading is higher than the previous record of 48 inches set during tropical cyclone Amelia of 1978 at Medina, Texas,” the National Weather Service said.
Jeffrey Lindner, a meteorologist for the Harris County Flood Control District, said water flooded 25 to 30 percent of Harris County’s 1,800 square miles of land.
On Tuesday, President Donald Trump visited the disaster zone in Texas, four days after Harvey slammed onshore as a Category Four hurricane, turning roads into rivers and neighborhoods into lakes.
Trump, who sought to project an image of leadership in America’s first big natural disaster since he took office in January, toured the coastal city of Corpus Christi, where he praised the work of state and federal officials.
“We want to be looked at in five years, in 10 years from now as, this is the way to do it,” he said.
“We love you, you are special, we are here to take care of you,” the president said. “It’s historic, its epic, but I tell you, it happened in Texas — and Texas can handle anything.”
In Houston, Mayor Sylvester Turner ordered a curfew late Tuesday from midnight to 5 am local time in to help prevent crime and keep the roads clear for first responders.
“We have thousands of people who are out of their homes, in shelters, waiting for water to subside,” Turner told a press conference earlier.