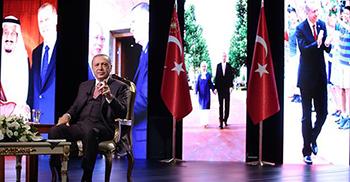 President Recep Tayyip Erdoğan has said that a country’s intelligence agency must be under the head of state, as he commented on the changes made in the functioning of the National Intelligence Agency (MİT) with the recent state of emergency decree.

“Isn’t the head of a state the one who should receive the most significant information and documents in intelligence? If the head of intelligence isn’t directly under the head of the state then the state loses its ability to act,” Erdoğan said during a joint broadcast by private broadcaster NTV and state-run broadcaster TRT Haber late on Aug. 28 to mark his third year as president.

The decree issued on Aug. 25, brought MİT under the authority of the president and re-activated intelligence gathering activities within the military. As part of the decree, responsibility for the MİT undersecretary was taken from the office of the prime minister and given to the president, prompting criticism from the opposition ranks.

Erdoğan said the practice is in place in “all of the big states.”

“The main opposition CHP [Republican People’s Party] is looking at the issue from that perspective because we have the habits of a parliamentarian democracy. The main opposition has been unable to move on to the presidential system,” he also said.

Erdoğan said with the April 16 constitutional referendum for an executive presidency, people took a step towards the presidential system with 51.4 percent who voted “yes.” He noted that the second step would be taken with the presidential election in 2019.

During his interview, Erdoğan said that MİT did not have a serious international portfolio 15 years ago, but now it does.

“Serious communication is taking place in the Islamic world and in the west. MİT is also taking further steps in humanitarian and technical intelligence and we have an intelligence agency that takes steps in being a determinative power in the region,” he said.

When asked about another change that was introduced with an Aug. 25 emergency decree, which gathered together all the investigations to be carried out into lawmakers within the Ankara Public Prosecutor’s Office and the trial processes in the Ankara Heavy Penal Court, Erdoğan said the new regulation would step up the trial process.

“We need to take fast steps in the issues regarding the lawmakers. Ankara is our capital and our parliament is here. Thus, it was decided that it would be more appropriate to continue legal processes in Ankara rather than different places,” he said, replying to the CHP’s criticism of the move “designing the opposition.”

“The main opposition needs a way out of these. They only muddy the waters, while our government continues on its way with determined steps. I believe that this change will be very beneficial for our country,” Erdoğan also said.

Erdoğan was also asked about his relationship with Prime Minister Binali Yıldırım.

“Do you think about all issues in the same way? How do you make decisions?” asked the host.

“If we don’t think differently, then there is something wrong. There should be differences from time to time so that our work has some beauty. The sun of truth rises from the clash of ideas. I have been walking together [with Yıldırım] since my term as Istanbul Mayor, which began in 1994,” Erdoğan replied.

“We founded our party and we became the government. We are together all the time and have taken some very significant steps together. I pray that God makes our unity everlasting,” he also said.