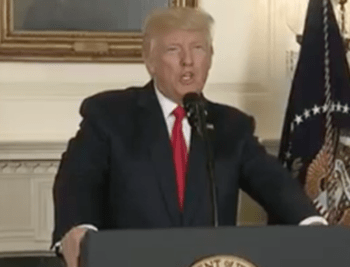 By Zainab Calcuttawala
A few days ago, the White House authorized new sanctions against Venezuela – a country struggling under the burden of running a socialist government while the value of its main asset, oil, continues to hover around $50 a barrel.

“This order demonstrates more clearly than ever that the United States will not allow an illegitimate dictatorship to take hold in the Western Hemisphere at the expense of its people,” National Security Adviser H.R. McMaster said Friday as President Donald Trump rolled out the fourth round of sanctions against Caracas this year.
The measures go to new lengths to prevent Venezuela from using its assets in the United States to fund itself. The PDVSA, the South American country’s state oil company, owns an American subsidiary, Citgo, which will no longer be allowed to repatriate its profits to its parent company. U.S. financial institutions will be barred from issuing new debt to PDVSA as well, making it harder for the regime to come up with the funds to meet its next debt payment.
American investors have a way out, though, officials say.
“We want to make sure that U.S. pensions or U.S. fiduciaries are not hurt by this, and if they want to sell their bonds they can do so,” Treasury Secretary Steven Mnuchin said last week. “But this will limit any new investments.”
Venezuela’s role in the energy circle is well known. It holds the world’s largest volume of energy reserves on the entire planet—more than Saudi Arabia, Libya, or any other nation that touts its bravado in fossil fuel markets. The country admittedly does not have the know-how to create and expend political capital, which is why it took so long for OPEC to reduce production after the market crash of 2014.
Russian forces had already begun to enter Venezuelan politics before the sanctions, but the Kremlin’s support of the country’s economic system becomes more blatant by the day.
“The very logic of sanctions implies further increase of tensions,” Maria Zakharova, a foreign ministry spokesperson, said, adding that the “actions of the people behind the sanctions are imbued with cynicism. Provoking and encouraging the destabilization of the domestic political situation [in Venezuela] from the outside cannot benefit ordinary Venezuelans, no matter what political views they may have.”
Data from the Energy Information Administration (EIA) shows that American imports of Venezuelan oil have not faltered in the months since Trump’s swearing in ceremony. Total imports remain over the 20-million-barrel mark, despite tensions between Maduro’s government and Trump’s anti-socialist geopolitical stance.
With this in mind, the sanctions against Venezuela are another nail in the coffin of Maduro’s regime. There was very little that could have been done to save his star from falling, but a blockade of funding from American sources other than Goldman Sachs will speed Maduro’s downfall. Surprisingly, Goldman Sachs, the bank that purchased $2.8 billion worth of PDVSA notes back in May, is exempt from certain critical parts of the executive order, but the bank still will not be allowed to offer more of its cash reserves to Venezuela.
Trump has not used all of his plays to get Caracas’ actions in line yet. Sustained imports of Venezuelan crude keep it so Maduro still has something to lose when playing geopolitics with United States. The next move is his.
By Zainab Calcuttawala for Oilprice.com