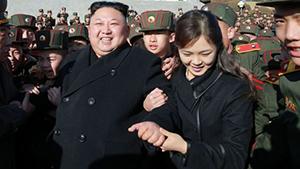 Like a lot of things in North Korea, Kim Jong-un’s family life is shrouded in mystery.

But reports from South Korea’s spy agency suggest his wife, Ri Sol-ju, gave birth to a third child in February this year.
Pregnancy speculation began in 2016 after her disappearance from the public eye.
Their other children are believed to have been born in 2010 and 2013 but it is not known if Kim Jong-un has a male heir to succeed him yet because the genders of the couple’s first and third child are still unclear.
We only know his second child is a girl called Ju-ae because US basketball star Dennis Rodman, an unlikely close friend of Jong-un, let it slip in an interview with the Guardian in 2013.
He described having a “relaxing time by the sea” with the Kims on a visit to the country and described Jong-un as a “good dad” who “has a beautiful family”.
Why is there so much mystery?
North Korean state media do not announce much about the leadership’s private family life.
Not a lot is known about Kim Jong-un’s upbringing and he only made his first publicised appearance in September 2010, shortly before his father’s death.
We don’t even really know when he was born, but it is estimated he was born in either 1983 or 1984.
His grandfather, Kim Il-sung (who founded the Democratic People’s Republic of North Korea) was often seen with his wife in public and in photographs with their children.
But his father and predecessor Kim Jong-il was a lot more elusive. He was thought to have had at least four different partners – Song Hae-rim, Kim Young-sook, Ko Young-hui and Kim Ok – but his relationships were mostly kept out of the public eye.
He did however father three boys and one girl.
North Korean television named “Comrade Ri Sol-ju” as Kim Jong-un’s wife in 2012 after speculation over the identity of a woman appearing at public events with him – but the pair likely married three years earlier.
A complicated line of succession
As the youngest of Kim Jong-il’s sons, Kim Jong-un was not considered a favourite to take over from his father, but was named successor in 2011 after his death.
Attention was brought on the complicated history of Kim Jong-il’s family after the assassination of his older half-brother Kim Jong-nam in an airport earlier this year.
A mysterious video of a man called Kim Han-sol claiming to be Kim Jong-nam’s son emerged online – making a male heir even more important for the North Korean leader.
In August 2013 North Korea’s founding principles were reportedly revised to enshrine the supremacy of the “Baekdu bloodline” to legitimise the Kim dynasty’s continued inheritance of the country’s leadership.
Who is Kim’s wife?
Little is known about Ri Sol-ju herself but it is widely reported she could have been a singer who caught Mr Kim’s attention during a performance.
There is a North Korean performer with her name but it has never been confirmed that they are the same person.
Analysts only believe Kim Jong-un and Ri Sol-ju have three children because of her unexplained absences and reappearances – it has never been confirmed officially.
Her western style of dress and relaxed relations with her husband in public drew comparisons with the first lady style of Michelle Obama.
This made many hope Jong-un was going to favour a moderate leadership style, but the country’s international relations have recently dramatically deteriorated after a series of antagonising missile tests.