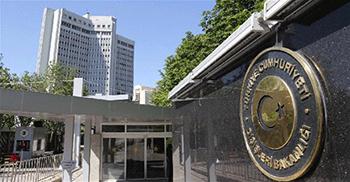 The Turkish Foreign Ministry has criticized a decision by the local administration of Kirkuk to participate in a planned referendum by the Iraqi Kurdistan Regional Government (KRG) on Sept. 25, saying it is a “serious breach” of the Iraqi constitution.

“We recall that the Baghdad Administrative Court ruled on Aug. 17, 2017 that the Kirkuk Provincial Council and the KRG do not have the authority to decide any status on controversial territory,” the Foreign Ministry stated on Aug. 29.

It added that Ankara had previously expressed concern to the KRG over the planned referendum, noting that the decision for the controversial poll had been boycotted by Turkmen and Arab groups.

“The persistent pursuit of this dangerous movement will not serve the interests of the KRG or Iraq, nor will it be accepted by the international community, nor will it contribute to the peace and stability of the region in this period of critical developments,” the statement read.

In a session boycotted by Turkmen and Arab deputies, the Kirkuk Provincial Council voted on Aug. 29 in favor of joining the planned independence referendum by the KRG.

Turkmen council member Ali Mehdi told Turkey’s state-run Anadolu Agency that 24 members attended the session and those members who did not attend would apply to Iraq’s Supreme Court regarding the vote.

The oil-rich Kirkuk province is one of the disputed territories between the Iraqi central government and the KRG. Article 140 of the Iraqi constitution, adopted after the U.S. invasion, stipulates that the administrative statuses of these areas should be determined with referendums by 2007. However, the referendums have still yet to be held due to the ongoing political turmoil in Iraq.