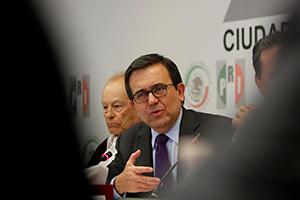 Ana Isabel Martinez and Lizbeth Diaz
MEXICO CITY (Reuters) – Mexico sees a serious risk the United States will withdraw from NAFTA and is preparing a plan for that eventuality, Economy Minister Ildefonso Guajardo said on Tuesday, calling talks to renegotiate the deal a “roller coaster.”

U.S. President Donald Trump has threatened three times in the past week to abandon the North American Free Trade Agreement, revisiting his view that the United States would probably have to start the process of exiting the accord to reach a fair deal for his country.
Trump has vowed to get a better deal for American workers, and the lively rhetoric on both sides precedes a second round of talks starting on Friday in Mexico City to renegotiate the 1994 accord binding the United States, Mexico and Canada.
“This is not going to be easy,” Guajardo said at a meeting with senators in Mexico City. “The start of the talks is like a roller coaster.”
The need for a back-up plan in case Trump shreds the deal underpinning a trillion dollars in annual trade in North America has been a long-standing position of Guajardo, who travels to Washington on Tuesday with foreign minister Luis Videgaray to meet senior White House and trade officials.
“We are also analyzing a scenario with no NAFTA,” Guajardo said.
In an interview published earlier on Tuesday in Mexican business daily El Economista, Guajardo said “there is a risk, and it’s high” that the Trump administration abandons NAFTA.
Responding to Guajardo’s comments, Canadian Prime Minister Justin Trudeau said his government would continue to work “seriously” to improve NAFTA.
Mexico’s Economy Minister Ildefonso Guajardo gestures as he delivers a speech during a meeting with senators in Mexico City, Mexico August 29, 2017.Carlos Jasso
Earlier this month, Guajardo told Reuters a “Plan B” meant being prepared to replace items such as the billions of dollars in grain Mexico imports from the United States annually.
To that end, and to seek openings in more markets, Mexico is hosting trade talks with Brazil this week. Trade officials are also discussing a possible replacement for the Trans-Pacific Partnership trade pact that Trump ditched after taking office.
Mexico’s Economy Minister Ildefonso Guajardo gestures as he answers questions to the media after a meeting with senators in Mexico City, Mexico August 29, 2017.Carlos Jasso
Overlapping with the NAFTA talks, Mexico will participate in separate trade meetings with Australia and New Zealand in Peru, and President Enrique Pena Nieto travels to China this weekend.
Still, attempts to diversify trade will not be easy. Some 80 percent of all Mexican exports go to the United States, and economies such as Brazil and China often compete with Mexico.
Guajardo also suggested World Trade Organization tariffs that would kick in if NAFTA crumbled would be more favorable for Mexico, a view held by many Mexican experts who think trade with the United States would survive the demise of the 1994 deal.
”I don’t think it’s going to make that much of a difference in terms of the trading relationship, said Andres Rozental, a former Mexican deputy foreign minister. “If we have to go to WTO tariffs, for us it’s fairly straightforward.”
Guajardo’s and Videgaray’s trip to Washington was announced after Trump not only threatened to pull out of the trade deal, but again said that Mexico would end up paying for the wall he wants to build between the two countries.
Mexico has refused point blank to pay for a wall. In January, after similar comments led Mexico to scrap a summit with Trump, the two sides agreed not to talk in public about it.
Reporting by Dave Graham; Editing by W Simon and Dan Grebler