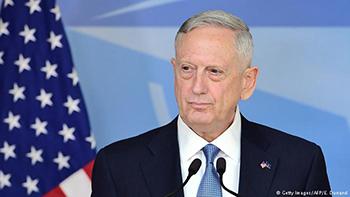 US Defense Secretary James Mattis has said transgender troops will remain in service until he advises US President Donald Trump on executing the ban. Several lawsuits have already been filed over Trump’s directive.
The current US military policy regarding openly transgender service members will remain in place while President Donald Trump’s new directive banning them is studied, said US Defense Secretary James Mattis on Tuesday.

Mattis appeared cautious about implementing Trump’s new policy directive, saying that a panel of experts will be convened to offer recommendations on the ban’s implementation.
“Once the panel reports its recommendations and following my consultation with the secretary of Homeland Security, I will provide my advice to the president concerning implementation of his policy direction,” the Pentagon chief said.
“In the interim, current policy with respect to currently serving members will remain in place,” he said.
Ban challenged in court
On Friday, Trump signed a memorandum banning transgender people from serving in the military, following a tweet announcing his plans in July.
The order directs the US military not to accept transgender men and women as recruits and bars the use of government funds for sex-reassignment surgeries for active troops unless the process is already under way. Trump said the ban should go into effect from March 23, 2018.
The directive created uncertainty for thousands of transgender members of the military, many of whom came out after Trump’s predecessor Barack Obama allowed transgender people to serve openly.
Trump’s order was hailed by some in Trump’s conservative base, but drew censure from Democrat lawmakers and advocates of lesbian, gay, bisexual and transgender (LGBT) rights.
The Trump administration is currently facing several lawsuits brought by service members and transgender groups. On Monday, the American Civil Liberties Union also filed suit against the ban on behalf of several transgender troops.
rs/rt (AFP, dpa, Reuters)