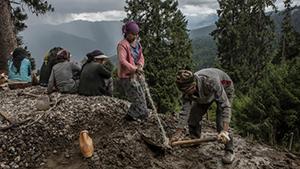 By Mihir Sharma
On a small plateau called Doklam, close to where the India-China border meets the tiny kingdom of Bhutan, two of the largest armies in the world faced off against each other. Chinese soldiers, convinced they were on Chinese territory, had brought equipment to extend a road; Indian soldiers, who viewed the land as disputed, blocked the earth-movers.

For three months, the armies camped just metres away from each other, the Indians on the higher ground and the Chinese in a little valley. Neither government seemed to know how to back down.
That’s now changed – although exactly how and why remains unclear.
On Monday, the Chinese Foreign Ministry announced that the Indians had “withdrawn” and that China would “continue to exercise its sovereign rights” over the plateau. Some Indian government officials claimed anonymously that China had backed off as well, removing its road-building equipment, although the official Indian statement didn’t confirm any such climbdown.
Perhaps both sides compromised. Perhaps India pulled out first; perhaps China promised to put its road-building on hold for a while, if not forever; perhaps some other deal was struck in an unrelated dispute, such as over counter-terrorism or China’s One Belt One Road infrastructure scheme.
We can’t know – and that’s fine. What matters is that two large, nuclear-armed countries – nations with outsized ambitions, hyper-nationalist lobbies and leaders who pride themselves on “strength” – somehow managed to find a way to wiggle out of a difficult position.
This is a welcome sign of maturity. A confrontation that bled into domestic politics was in neither government’s interest. That they managed to defuse the standoff – just days before Indian Prime Minister Narendra Modi was due to visit China for a BRICS [Brazil, Russian, India, China and South Africa] Summit – reflects well on their diplomats.
Over the coming decades, India and China are destined to clash time and time again. China, which has been so determined that the world make place for its rise, has done precious little to make space for India rising in turn. For strategic planners in Beijing, India is still too insignificant to matter, with an economy still a fifth the size of China’s.
But Indians don’t see the situation like that. If their country isn’t China’s equal now, they reason, it will be in a few decades – and they had better start behaving as if it already is. This clash of world views will inevitably be mirrored in more concrete tensions on the ground.
The real question is how these clashes will be handled. Predicting the course of public opinion in both countries is pretty crucial to answering that question. But that isn’t so easy. The Indian media has, in the past, reacted with shrill jingoism to Chinese “incursions” across the border, while the Chinese media has more calmly repeated its government line.
This time, India’s news channels – always ready to create “war rooms” in safe New Delhi studios featuring anchors dressed absurdly in flak jackets – largely kept their rhetoric under control. Critics complain about the stranglehold that Modi’s government has over the news. But, in this case, government pressure may have had a beneficial effect.
Meanwhile, in an odd inversion, the Chinese state-owned media grew rabid over the Doklam stand-off, launching broadside after editorial broadside into the soft target that is under-achieving India.
Yet, in the end, neither the Indian media’s restraint nor China’s anger seemed to feed into the calculations of Indian and Chinese diplomats.
So what the Doklam stand-off suggests is that, even although clashes might be constant and unavoidable, we can hope that neither side will feel it’s worthwhile escalating petty confrontations to a genuinely dangerous level. Certainly, that’s been the case so far.
Unlike India’s other disputed border, with Pakistan, there hasn’t been a shot fired in anger over the India-China border in decades. Earlier this month, when pictures emerged of Indian and Chinese soldiers scuffling and throwing stones at each other by a mountain lake in Ladakh, the subtext was actually quite heartening: Everyone involved knew better than to use bullets.
Bloomberg