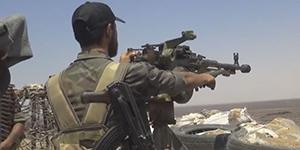 SANA reporter said that the Army’s raids also targeted ISIS gatherings in the villages of al-Hussan, al-Jneina, Ayash, al-Khareeta, al-Treif, Ain al-Boujemma.
Army units clashed with terrorist groups in Bogheilia, al-Reshdia, al-Maqaber and the surrounding of the Airport where many of the terrorists were killed or injured.
Local sources told SANA that more than 30 terrorists fled away from al-Bukmal city, which made the terrorists put posts in the city to arrest people and make them join the battles by force as to compensate for the shortage of personnel.