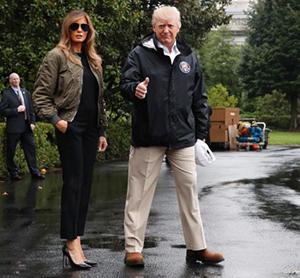 By Annie Brown
You know all those dinky photo opps where navy suit wearing political types don a hard hat or overalls (etcetera) and roll up their sleeves to survey a disaster scene, or meet locals, or to seem like they’re just like the rest of us ordinary folk trying to make it through another day?

Well they have a purpose.
Yes, that old chestnut. Because in politics, and indeed public life, what you wear and how you carry yourself, matters. Just ask French president Emmanuel Macron who last week raised eyebrows with his rather hefty personal make-up artist bill, and Louise Linton, wife of Treasury Secretary Steven Mnuchin who was called out on social media for hashtagging all of her designer threads in a particularly obnoxious Instagram post while accompanying her husband on government business.
The same can be said of the First Lady Melania Trump, who, it must be said, unlike her predecessor Michelle Obama has never attempted ‘relatability’ (another hoary chestnut!), Remember that fabulous $70, 000 Dolce & Gabbana jacket?
Team Trump set off from the White House on Tuesday to visit areas devastated by the flooding that Tropical Storm Harvey has unleashed in Houston, Texas. Melania’s Air Force One look? Tailored trousers, a khaki bomber jacket and towering, spindly heels that look like classic Manolo Bhlaniks – a designer shoe brand that as Vanessa Friedman notes in The New York Times, “are redolent of a certain clichéd kind of femininity: decorative, impractical, expensive, elitist (all adjectives often associated with the brand ‘Trump’)”.
Melania did change into a pair of Adidas Stan Smith sneakers and jeans, a crisp white shirt and baseball cap branded with the logo “FLOTUS,”before disembarking the plane in Texas (lest anybody forget who she is or that she’s part of a family fond of personal branding/bragging), but the damage had, in a way, already been done.
People were quick to criticise Melania’s impractical, and out-of-touch, choice of attire on social media.
In response to the criticism, Stephanie Grisham, Melania Trump’s communications director, sent around the following statement: “It’s sad that we have an active and ongoing natural disaster in Texas, and people are worried about her shoes.”
Which is fair, but also deeply unfair. A blanket dismissal of criticisms about a choice of shoes doesn’t take into the account the nuance of what our clothes say about ourselves, and what we stand for. Or, to be more precise, what the Trump presidency is standing for, people that are, as mentioned previously, big on branding.
Yes, a pollie (or a first lady) in a hard hat might seem contrived (though also, an occupational health and safety requirement) but it shows a certain self-awareness and a compassion for others. Something that the Trump presidency – and its affiliated hanger-ons – either blithely miss, or deliberately leave behind.
An interesting choice for a president whose platform was all about speaking for the common, forgotten man.
As Robin Givhan wrote of Melania Trump’s Dolce dream coat, our choice of clothes don’t make us evil (or good) but it does matter.
“Fashion is no greater indication of being divorced from life’s hardships than any other benefit of wealth. And it’s often glorious evidence of life’s beauty. Clothes aren’t cruel or uncaring. That’s left to the people who wear them.”
So yes, as Vanessa Friedman notes, “details matter. Even shoes. Put your best foot forward, and all that.”