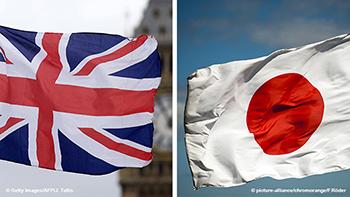 British Prime Minister Theresa May is headed to Tokyo in an effort to consolidate differing Brexit interests. The UK wants to lay the groundwork for a future trade deal, but Japan has other concerns.
With the UK preparing to leave the European Union, British Prime Minister Theresa May is wasting no time trying to lay the groundwork for future bilateral trade agreements, and Japan is her latest target. The EU and Japan agreed in principle on an extensive free trade agreement in July in Brussels. The UK is hoping to piggyback off that deal for an agreement of its own with Japan.

May will be accompanied by a large delegation of business leaders on a three-day trip to Tokyo this week to initiate talks. She contends that as an EU member, Britain helped craft the EU-Japan free trade agreement, and Tokyo could thus reach a similar deal with the UK.
‘Orderly’ divorce
But these talks are not a priority for Japan, according to media reports out of Britain. “I don’t think there will be substantial progress,” a Japanese trade official who chose to remain unnamed told the Financial Times newspaper. Trade deal negotiations with the EU have not yet come to an end, and although the EU and Japan “agreed at the political level,” many points are still open, stressed the official.
For Japan, addressing economic concerns over Britain’s looming EU departure tops the agenda. Japanese officials are expected to tell Theresa May to end the “sense of crisis around Brexit,” according to a report in The Telegraph newspaper. “Yasutoshi Nishimura, deputy chief cabinet secretary said he wanted the UK’s divorce with Brussels to be conducted in an orderly manner to avoid any disruption for Japanese businesses operating in the UK,” the Telegraph’s political correspondent Jack Maidment wrote.
Job and investment concerns
EU rules do not allow Britain to conduct formal negotiations on free trade agreements before it leaves the bloc. May can thus only arrange informal, preparatory talks with Japan. But laying the groundwork for such an agreement would mean a political victory for the British prime minister, as she has often argued that after Brexit, the UK would be able to establish free trade deals with large nations like Japan and the United States.
Japan, however, wants to persuade Britain to opt for the softest possible Brexit in order to limit the economic impact on its business sector. Roughly 1,000 Japanese companies employing around 140,000 people are currently operating in the UK.
A memorandum from Japan’s government in September 2016 warned that Brexit may force Japanese financial institutions and other businesses to move to mainland Europe. According to the 15-page memo, Japan has been increasing business activities in Britain ever since the era of Margaret Thatcher. The former prime minister touted the country as the gateway to the EU, and Japan feels that the British government has a moral obligation to keep this promise.
The concerns emanating from Tokyo are manifold: restricted access to the EU, the loss of the Schengen privileges, difficulties recruiting workers, the introduction of new customs duties, and the possibility that London could lose its status as a global financial hub. Furthermore, should the European Medicines Agency move from London to another EU city, Japanese pharmaceutical companies may no longer view Britain as an attractive place for research and development.
Moving to the mainland
Several leading Japanese financial institutions have now announced that they want to move their headquarters to continental Europe. Nomura, Daiwa and Sumitomo Mitsui have already chosen Frankfurt, while it is rumored that Mitsubishi UFJ favors Amsterdam.
Other major Japanese companies based in England are discussing potential relocation. In doing so, they are counting on incentives from the countries of their future headquarters. Hitachi Rail, for example, is being wooed by Italy, as the Japanese rail company acquired shares in Ansaldo STS in 2015.
Japanese carmakers are less inclined to move. Half of British car production is in their hands, but the cars are mainly exported to EU countries. The largest Nissan factory in Europe, situated in the northern English city of Sunderland, employs some 6,700 people. Nissan and Toyota have invested 3.7 and 2.2 billion euros ($4.43 and $2.63 billion) in the UK respectively. Both auto manufacturers announced new investments after the British government promised to help with Brexit.