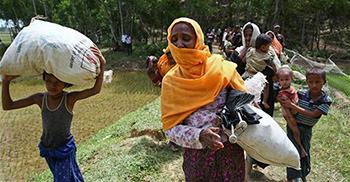 Ankara has demanded the international community take immediate action to help Rohingya Muslims in Myanmar, with top officials voicing their concern over the suffering of the minority community.

“We have been following the process from the very beginning, not just watching it. We are in contact with the whole world. Our President Recep Tayyip Erdoğan and Prime Minister Binali Yıldırım are following the process in person,” Çavuşoğlu added, highlighting the need to find a “well-established” solution.

“Previously there were also serious attacks against Rohingya Muslims. The problem is systematic. Our Rohingyan brothers have been systematically under oppression and have been deported,” he said.

Çavuşoğlu said Ankara was engaging in diplomatic efforts with the U.N., the U.S., and the Organization of Islamic Cooperation.

“All these international organizations should take concrete steps,” he urged.

“It is not acceptable that international organizations are just standing by and watching the massacres in the northern Rakhine state of Myanmar. The massacres are just being watched, as if international law and institutions do not exist. This crime against humanity has turned into genocide,” Çelik tweeted on Aug. 29.

“International organizations should not be just standing by and watching the massacres, described as a slow-burning genocide. The U.N. and EU institutions should act immediately to stop this massacre by resorting to swift and effective means,” he added.

Speaking on state-run broadcaster TRT Haber, Erdoğan accused the world of being “blind and deaf” to the oppression of the Rohingya Muslims in Rakhine state, vowing that Ankara would raise the issue at all international organizations.

“This [violence in Myanmar] will be on our agenda at the General Assembly of the United Nations [on Sept. 19],” he said.