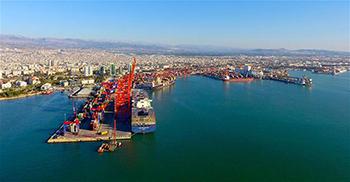 Turkey’s foreign trade deficit increased by 82.5 percent in July compared with July 2016, according to official data.

The provisional data, produced with the cooperation of the Turkish Statistical Institute and the Ministry of Customs and Trade and made public on Aug. 29, showed Turkey’s exports were $12.64 million last month with a 28.3 percent increase and imports were $21.49 billion dollars with a 46.2 percent increase compared with July 2016.

In July, the main partner country for exports was Germany with $1.21 billion. The country was followed by UAE with $1.098 billion, the United Kingdom with $811 million and Iraq with $773 million.

Last month, the top country for Turkey’s imports was China with $2.13 billion. The country was followed by Germany with $1.83 million, Russia with $1.8 billion and the U.S. with $1.38 billion.

The ratio of medium-high-technology products in manufacturing industries’ products was 34.7 percent.

Turkey’s economic confidence index climbed to its highest level since July 2012, according to official data released on Aug. 29.

The economic confidence index increased by 2.5 percent to 106 points in August, up from 103.4 points in July, the Turkish Statistical Institute (TÜİK) said in a report.

Among all indexes, the construction confidence index rose the most, by 3.3 percent, to 88.3 points.

The real sector confidence index climbed to 110.2 points with a 2.3 percent month-on-month increase, followed by services (105.4 points) and retail trade (108.5 points) sectors with increases of 1.6 percent and 1.1 percent, respectively.

In August, only the consumer confidence index declined, down 0.3 percent to 71.1 points.

According to the TÜİK definition, the index indicates an optimistic outlook regarding the general economic situation when it is above 100.

It indicates a pessimistic outlook when it is below 100.