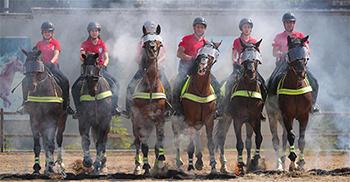 Mounted police forces units, which once patrolled the streets during the early years of the Turkish Republic before being disbanded, are once again back in the saddle in the capital Ankara, the Aegean province of İzmir, and the Mediterranean province of Antalya.

The mounted police officers will be utilized especially in providing security at football matches, marches, and street demonstrations.

“We are the police forces’ smiling face. We run the public relations [of the police forces]. Even the most angry crowd or protestor calms down when they see us, they control their anger and pet our horses,” said the chief police officer of Ankara’s Mounted Police Department.

“The purpose of our establishment is to oversee social events and act as a deterrence for crime. We take assignments at sports competitions, especially football marches, demonstrations, marches, ceremonies, and in parks … Children come and have their photographs taken [with us]. In a way, we run a social responsibility duty,” Mahmut Kılınç said.

He also touched on the training of the horses to prepare them to be “calm” and focused.

“When we get our horses, they have been already exposed to basic riding training. Here [at the police forces], we put them through advanced riding training. There are obstacles and flags in the training area. We throw smoke bombs, light fires, and make various sounds. The purpose of this training is for the horse to stay calm when it encounters one of these incidents outside. Our horses are kept ready every day and we ensure that they discharge their energies and stay healthy thanks to exercise,” Kılınç added.

A horse can stay on duty for between 15 and 20 years. Every horse is under a watch of a veterinary officer 24 hours a day but their care is undertaken by their riders and police officers. Every mounted police officer cleans their horses’ accommodation area first thing in the morning, then they groom them. After a short health check-up they take them to the training area. If a horse is determined to have a chronic illness they are put into retirement and given to animal lovers and farm owners.

The mounted units of police forces were disbanded shortly after its formation in the early years of the modern Republic of Turkey due to high costs. In 1995, a by-law was prepared for them to be established once again and for the past three years they have been on active duty. There are currently five female mounted police officers in Ankara and one in İzmir, but officials plan to boost this number in the coming period.

Police officers selected to perform their duties in the mounted unit are under the age of 28 and have a balanced weight-height ratio. These officers are then given four months of training and those who complete their training successfully are then accepted into the unit.

One of the police officers currently on duty, 27-year-old Elanur Arslan, told Hürriyet that the connection she has with her current horse is “amazing.”

“[She] is like my child, my friend. She is the apple of my eye. The citizens’ approach to us is also beautiful. When children see us they immediately tell their parents: ‘I want to be a police officer too,’” Arslan said.