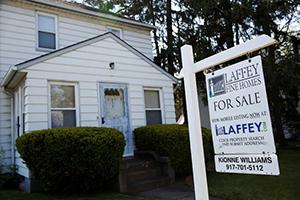 Lucia Mutikani
WASHINGTON (Reuters) – U.S consumer confidence surged to a five-month high in August as households grew increasingly upbeat about the labor market while house prices rose further in June, suggesting a recent acceleration in consumer spending was likely to be sustained.

The data on Tuesday also supported views that economic growth would accelerate in the second half of the year after a sluggish performance earlier.

“Despite a daily dose of worrying headlines, consumers still have plenty to be confident about right now. Home prices are rising, stocks are just off record highs and the labor market is churning out jobs,” said Robert Kavcic, a senior economist at BMO Capital Markets in Toronto. “That should continue to support solid consumer spending growth through the rest of the year.”

The Conference Board said its consumer confidence index increased to a reading of 122.9 this month from 120.0 in July. That was the strongest reading since March when the index hit a 16-year high of 124.9. August was also the second highest reading since 2000.

Strong consumer confidence bodes well for consumer spending, which accelerated in the second quarter after slowing at the start of the year. It also provides a boost to the economy after it grew 1.9 percent in the first half of the year.

The dollar pared losses against a basket of currencies on the data. Prices for U.S. Treasuries were little changed after earlier rising on safe-haven buying after North Korea fired a ballistic missile over Japan’s northern Hokkaido island into the sea. Stocks on Wall Street were marginally lower.
BULLISH CONSUMERS

Economists said bullish consumer optimism, together with the tightening labor market, were compelling reasons for the Federal Reserve to increase interest rates again this year despite worries about persistently low inflation.

“Consumers seem very confident in their ability to find a new job. They also are becoming more bullish on the outlook for stock prices even as the market holds near record highs,” said John Ryding, chief economist at RDQ Economics in New York.

“The Fed has put significant weight on consumer confidence in forming its views on the economy and, from that perspective, this report supports further rate increases.”

The U.S. central bank has raised rates twice this year. Economists expect the Fed will announce a plan to start reducing its $4.2 trillion portfolio of Treasury bonds and mortgage-backed securities in September and hike rates in December.

The Conference Board survey showed consumers mildly upbeat about their short-term income prospects. The percentage of consumers expecting an improvement in their income rose slightly to 20.9 percent this month from 20.0 percent in July. The share expecting a drop fell to 7.8 percent from 9.5 percent in July.

Despite being near full employment, the labor market has struggled to generate strong wage growth, a frustration for both consumers and policymakers.

A second report on Tuesday showed the S&P CoreLogic Case-Shiller composite index of house prices in 20 metropolitan areas rose 5.7 percent in June on a year-over-year basis after a similar increase in May.

An acute shortage of homes on the market and strong demand are pushing up house prices. While rising house prices are boosting equity for homeowners, the dearth of properties is hurting home sales.

“Tight market conditions will drive house prices higher over the remainder of the year, although cautious appraisals and tougher mortgage lending regulations will act to prevent a dangerous house price boom,” said Matthew Pointon, an economist at Capital Economics in New York.