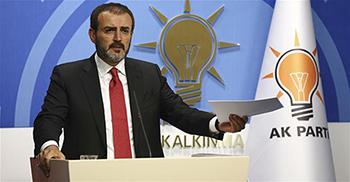 “The final declaration of the congress denies the successes of AKP governments on the economy, justice, freedom of belief, education, guaranteeing different lifestyles and the media. It aims to counter our [Fethullahist Terrorist Organization] FETÖ cases in the international arena by giving the message that ‘there is no judiciary in Turkey,’” Ünal stated on Aug. 30.

His comments came after the final declaration of the CHP’s four-day justice congress in the western province of Çanakkale included harsh criticism of Turkey’s current justice record.

“Courts are not independent or impartial. The people have given up hope in courts and politics influences the judiciary,” CHP leader Kılıçdaroğlu said on Aug. 29, reading aloud the declaration.

“The state has transformed into a party state, the principle of separation of powers has been destroyed, a one-man regime has been established,” Kılıçdaroğlu added.

Ünal criticized the declaration as having been written “with a method that abuses the concept of justice.”

The main opposition CHP aims “to facilitate the efforts of factions that attack Turkey in the international arena by exploiting the will of justice,” he claimed.

“A struggle for justice which looks out for moral and political legitimacy cannot be carried out by deeming the constitution ‘illegitimate,’ the elected government as a ‘civilian dictatorship,’ the elected president as a ‘dictator,’ and calling out for covert riots,” Ünal said.

He also criticized Kılıçdaroğlu for tryin to “influence the judiciary by openly attacking ongoing judicial processes.”

“Is Kılıçdaroğlu’s attitude compatible with Article 138 of the constitution?” he said, referring to the article stipulating the impartiality of the judiciary.

The AKP spokesman claimed that the declaration “aims to pave the way for FETÖ members who are currently under investigation in Turkey to apply to the European Court of Human Rights, by smearing the domestic remedies.”

“By saying there is no law in Turkey, there is no justice in courts, judges take instructions from the government, and domestic legal remedies have been disregarded, they aim to pave the way for FETÖ members to apply to ECHR,” Ünal said.

“These statements will form the basis to reverse judicial rulings in the ECHR,” he added.

Ünal also criticized Kılıçdaroğlu by referring to the case on the stopping of National Intelligence Agecny (MİT) trucks at the Syrian border, in which CHP lawmaker Enis Berberoğlu has been sentenced to 25 years for leaking intelligence.

“Kılıçdaroğlu is part of a big plot aiming to put Turkey on trial through the MİT operation, which FETÖ organized. He is working to annul the trials of FETÖ in the international arena,” he claimed.