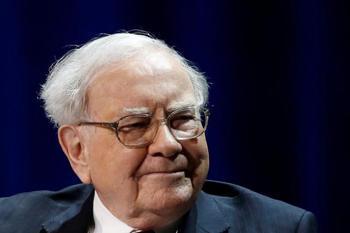 By Noah Buhayar
Warren Buffett, the billionaire chairman and chief executive officer of Berkshire Hathaway Inc., said the rally in markets over the last several years has made it harder to find bargains, but that stocks remain his choice over bonds.

When asked why cash has been piling up at Berkshire, he told Bloomberg Television’s David Westin, “It tells us stocks aren’t as cheap as they’ve been most of the time.” Buying shares after the 2008 financial crisis, Buffett said, was like “shooting fish in a barrel.”
In a separate interview Wednesday with CNBC, the Berkshire CEO said he continued buying stock in Apple Inc. this year, even as one of his deputies was selling. And he tamped down on speculation that Kraft Heinz Co. would pursue a takeover of Mondelez International Inc. Berkshire is the largest shareholder in Kraft Heinz and controls the company along with buyout firm 3G Capital.
Buffett, 87, built Berkshire into a sprawling conglomerate over the past five decades through shrewd stock picks and takeovers. The company’s dozens of subsidiaries now include insurers, manufacturers, retailers and a railroad. Its stock portfolio — which includes multibillion-dollar stakes in companies like Wells Fargo & Co. and Coca Cola Co. — was valued at more than $135 billion at the end of June.
Stocks “have gotten less attractive as they’ve gone along,” Buffett told Westin. “They’re still very attractive compared to bonds” because interest rates are so low.
The S&P 500 is in its second-longest bull market on record, having more than tripled since March 2009 in a rally that has added almost $19 trillion to share values. In 2017 alone the gauge has closed at record highs 30 times.
Even as valuations make it harder for Buffett to find new investments, some of his older ones are paying off. On Tuesday, Bank of America Corp. said that Berkshire had converted its preferred stake into common shares. The transaction locked in a paper gain of more than $11 billion on an investment that Buffett made six years ago, when the bank’s shares were tumbling amid probes tied to the housing meltdown.
“They were in significant trouble, but that’s like a great athlete being in the hospital for an accident,” he told Westin. The decision to convert the stake, he added, was “fairly automatic” since Bank of America’s common shares now pay a higher dividend than the preferred did.
In addition to Apple, Buffett has been finding some smaller investments this year. In June, he threw a lifeline to Home Capital Group Inc., an embattled Canadian home lender. Its shareholders are scheduled to vote on a second part of that transaction next month, which would increase Berkshire’s stake from almost 20 percent to 38 percent.
Proxy advisory firm Institutional Shareholder Services Inc. said it opposed the additional share sale, because the dilution wasn’t worth the extra reputational and strategic benefit of having Berkshire as a larger holder. Glass Lewis & Co., another proxy advisory firm, supports the transaction.
Buffett said the opposition from ISS wasn’t discouraging to him.
“We knew it’d be subject to the vote of the shareholders and if the shareholders vote it, we buy it, and if the shareholders don’t vote it we don’t buy it,” Buffett told Westin. “We knew that could go either way.”
Finding companies that Berkshire can take control of has been a bigger challenge lately for Buffett. Earlier this month, his bid to buy the majority of Oncor Electric Delivery Co., Texas’s largest power distributor, fell apart. That failed effort came six months after a Berkshire-backed deal to buy Unilever hit the skids.
The collapse of two high-profile pursuits in such a short time frame is a rarity for Buffett, who did his last major deal in 2015 when Berkshire agreed to buy aerospace-parts manufacturer Precision Castparts Corp. for more than $35 billion. While he’s made many offers that went nowhere, it’s less common for such misses to play out in public.
The deal drought has bigger implications for Berkshire. The company doesn’t pay a dividend and rarely buys back its own stock, so failing to consummate major transactions means cash piles up from its subsidiaries. At the end of June, Berkshire had just shy of $100 billion.
Buffett did the interviews in New York, where he’s dining Wednesday with the winner of an annual charity auction that raises money for Glide, a San Francisco non-profit. The top bidder, who chose to remain anonymous this year, paid $2.68 million to bring as many as seven friends to lunch with the billionaire at Smith & Wollensky steakhouse.
— With assistance by Katherine Chiglinsky, Sarah Ponczek, Oliver Renick, and Jennifer Surane