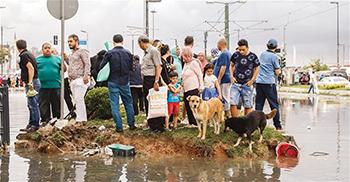 The Istanbul Municipality had warned citizens over the flood risk and storm approaching in the early hours of the day. Istanbul Mayor Kadir Topbaş stated that wind speeds would see 75 km per hour.

Strong rainfall and storms largely hit part of Istanbul at noon as main roads closed due to flooding and the visibility range decreased to five meters in Istanbul traffic.

The rainfall and storm also affected maritime transport. Some inner city and long distance ferry lines were suspended due to the risk of storms.

Citizens took shelter from the storm in bus stops, entrances of buildings and offices.

Meanwhile, Odesa Boulevard in Istanbul’s Şişli district was flooded. Three vehicles on the boulevard were stranded on the road due to flood waters.

One of the drivers of the vehicles rescued his vehicle on his own.

“I took my car out from the flood water by pushing it back. The vehicle took on water and it does not work. I have to call a mechanic now,” he added.

Another driver also said he was stranded in the previous rainfall in Istanbul’s Dolapdere district.

“We have not learned our lesson from the previous experience. I was stranded before during the last rainfall in Dolapdere district. This is horrible,” he said.

Meanwhile, Istanbul’s iconic square, Taksim was also affected by the storm and rainfall.

Officials of Taksim metro station took precautions with sandbags against flood water as numbers of citizens took shelter in the station waiting for the rainfall to decrease.

However, the tunnel in Taksim connecting Istanbul’s Beşiktaş and Kağıthane district was flooded.

Some vehicles were stuck in the middle of the tunnel and some of them caused a traffic jam after refusing to enter the tunnel.

The Asian side of Istanbul, including Beykoz, Çekmeköy, Üsküdar and Ümraniye were also affected by the heavy rainfall. Istanbul’s Üsküdar coastline flooded again as ponds formed on some parts of the coastline.

A driver was injured after crashing into barriers in Üsküdar’s coastline and was taken to the hospital.

Heavy rainfall also affected Istanbul’s neighboring Yalova province. Large numbers of trees toppled due to the strong winds. Many roads were closed due to the trees that had fallen over as vehicles were also damaged.

On July 18, heavy rainfall hit the province as meteorologists described it as the heaviest rainfall in 32 years.

Flash flooding saw main roads turn into rivers, with many soaked commuters forced to abandon submerged vehicles. Silivri was the district most affected by the flash floods.

Millions of locals in Istanbul struggled and waded to work in the morning after transport networks were swamped from the early-morning thunderstorm that boomed over the city.

Main streets and basement floors of apartments in Silivri were completely flooded. Many vehicles were also submerged.

Meanwhile, heavy hail damaged large numbers of vehicles and left holes on hoods and broke many windshields on July 27.

The Istanbul Metropolitan Municipality announced that some 228 trees tumbled down in the city and the roofs of some 88 buildings blew off as a result of the heavy rain.

In the first five minutes of the rain, fire departments received about 250 reports of flooding in the city.

About 10 people, including two in critical condition, were reportedly taken to the Haydarpaşa Numune Hospital for treatment after receiving various injuries from the rain.