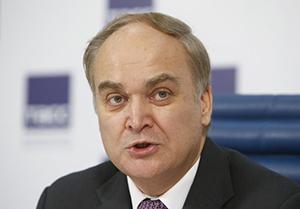 “The time has come to resume joint meetings of Russia’s and the United States’ foreign and defence ministers in a ’two plus two’ format,” Antonov said in an interview published on the Kommersant business daily’s web site.

Military contacts between Moscow and Washington were frozen in 2014 due to the Ukraine crisis.

Antonov also called for meetings between the heads of Russia’s Federal Security Service and Foreign Intelligence Service and the U.S. Federal Bureau of Investigation and Central Intelligence Agency.

Antonov, a former deputy foreign minister, is subject to European sanctions over his role in the conflict in Ukraine.