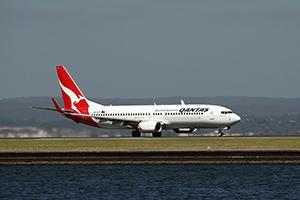 By Angus Whitley
Singapore notched up a victory over rival aviation hub Dubai as Qantas Airways Ltd. rerouted its classic Kangaroo Route to the U.K. through Asia.

With travel demand surging in Asia, Australia’s national carrier will fly from Sydney to London through Singapore instead of the Middle East under a renegotiated alliance with Emirates, Qantas said in a statement Thursday.
Reverting Qantas’s 82-year-old, long-haul service through Asia reflects a shift in the balance of power away from the Gulf as the world’s key aviation hubs, including Singapore, Hong Kong and Dubai, joust to retain their roles as key transit points for regional flights. Asia is the fastest-growing air travel market and China is expected to displace the U.S. as the world’s largest aviation market around 2024.
“This allows us to expand our Asian operation,” Qantas Chief Executive Officer Alan Joyce said on a conference call with reporters. He’s plowing capacity and routes into the region as Australia draws record visitor numbers from China.
Ditching Dubai, the headquarters of partner Emirates, also shows how a three-year turnaround at Qantas that delivered record profits has given Joyce more power over his partners. When he dumped British Airways for an alliance with Emirates in 2012, Qantas had just reported its first annual loss in more than a decade and some international routes were hemorrhaging cash. Qantas had also turned its back on Singapore the same year as part of the Emirates tie-up.
“Our partnership has evolved to a point where Qantas no longer needs to fly its own aircraft through Dubai,” Joyce said.
Qantas shares climbed 0.9 percent to A$5.71 as of 1:07 p.m. in Sydney, taking this year’s gains to 71 percent.
Flight QF1 on an Airbus A380 from London to Sydney will fly through Singapore from March next year. At the same time, Qantas’ current Melbourne-Dubai-London service will go through Perth when Qantas starts the world’s first direct flights from Australia to London next year.
To be sure, Joyce said Emirates also benefits from the renewed five-year partnership with Emirates. Qantas passengers can fly on Emirates’ own planes from Australia to Dubai, from where they can reach Europe, the Middle East and Africa. Joyce called it “a partnership of equals.”
The new alliance will deliver to Qantas more than A$80 million ($63 million) annually in net benefits, starting from the year ending June 2019, the airline said.