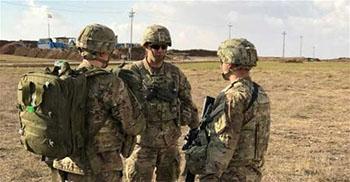 “Our forces did receive fire and return fire and then moved to a secure location,” Dillon said, adding that the coalition has told Turkey to tell the rebels it backs there that firing on U.S.-led coalition forces “is not acceptable.”

“Recent incidents have occurred in territories primarily under the control of Turkish-backed fighters. We are engaged with Ankara and other parties to address this danger,” Pentagon spokesman Eric Pahon told CNN.

He added that although U.S. troops returned fire there were no casualties on either side.

The coalition has reportedly delivered a demarche, or diplomatic protest, to Ankara following the attack on U.S. forces by Turkey’s allies.

The incident occurred around the same time as U.S. Secretary of Defense Jim Mattis was visiting Turkey to meet with his Turkish counterpart and President Recep Tayyip Erdoğan, CNN reported.

Approached by the Hürriyet Daily News, Turkish Foreign Ministry officials did not comment on the U.S. demarche to Ankara.

The reported clash comes weeks after attacks against U.S. troops in the area were first reported and confirmed by coalition spokesman Dillon.

Following those attacks, he said U.S. and coalition troops “reserve the right to defend ourselves.”

U.S. ground forces are in northern Syria as part of the U.S.-led coalition supporting the Syrian Democratic Forces (SDF), a local alliance of Kurdish and Arab militias battling the Islamic State of Iraq and the Levant (ISIL).

Last year, Turkey-backed Syrian rebel groups carried out the “Euphrates Shield” offensive next to SDF-held areas aimed at both pushing ISIL from the border and quelling the expansion of Kurdish influence.

The rebels and the SDF have often exchanged small arms and artillery fire in other parts of northern Syria where U.S.-led coalition forces are not patrolling.

“Our overt patrols, which have been conducting patrols in that area to keep tensions down, received fire multiple times over the course of the last two weeks,” Dillon stated.