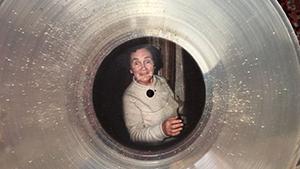 By Lorelei Mihala Business reporter
John Hobson is listening to a recording of conversations with his late mother, mostly small talk about family.

The words are on a vinyl record, although this is more than a recording of memories.
The ashes of Madge Hobson are combined with the vinyl, with a photograph and details of her life printed on the labels.
“It makes the perfect family record, which can be passed down the generations,” says Jason Leach, 46, the founder of And Vinyly, which produced the disc.
The firm is part of a fast-growing sector of the end-of-life industry. No longer need ashes be stored in an urn or scattered to the wind. Now you can wear, drink from, or display a little part of what is left of your loved one.
Mr Hobson, a 69-year-old sculptor, says his mother, a devout churchgoer, would thoroughly approve of her record.
“I had to weigh out a quantity of the ashes [which had been kept in an urn], and put a large teaspoonful into a number of small plastic bags, one for each disc,” he says.
Fifteen records were pressed for family and friends. Says Mr Hobson: “I think And Vinyly has undoubtedly helped to keep the memory of my mother alive.”
Mr Leach, based in Scarborough, north east England, began pondering the possibilities of pressing ashes into records about 10 years ago.
There was no business plan. He was just reflecting on mortality, issues brought into sharper focus when his mother began work at a funeral directors.
“I was amazed by how little I or any of my friends had even properly considered or even accepted our own mortality, and how incredibly sheltered many of us are from death and conversations around it,” Mr Leach says.
“It was not intended to be a business. It was the result of having a bit of fun with what at the time felt like a shocking and disconcerting inevitability.”
The process is the same as making a standard vinyl disc, with ashes (human or pet) added at a specific stage in production.
“It’s a balance between adding enough ashes so as to be seen, but not so much as to affect the grooves’ smooth playing,” says Mr Leach.
“There will, of course, be some extra pops and crackles resulting from the inclusion of ashes – but we like these, as this is you.”
Prices vary as every request is different, he says. A basic package costs about £900, rising to about £3,000.
Options include 7-inch or 12-inch discs, specially-composed music, a portrait painted on the record using the ashes, and clear or coloured vinyl.
Mr Leach, a music producer and music label owner, currently presses about two discs a month that have human ashes added to them, on equipment he already owns.
But he is in the process of arranging more funding to meet rising demand. He is also linking with funeral homes which will offer the service. “The concept markets itself,” he says.
“Of course, there are those who find it strange, even creepy, but most people actually come round to the idea.”
And his plans for his own record? Spoken words from him, his partner of more than 25 years, and their two daughters, plus some music he has written.
“I like to think about my great, great grandchildren listening to me. This is about as close to time travel as I’m going to get,” he says.
Image copyright Algordanza Image caption Algordanza’s diamond-making machines produce more than 1,000 stones a year
In Domat/Ems, Switzerland, Rinaldo Willy, 37, has another way of keeping memories alive – turning ashes into diamonds.
“I was diagnosed with cancer at the age of 21, and therefore was sensitised to the topic of death,” he says.
While a business studies student, in 2003, he read about isolating carbon from ashes to create synthetic diamonds. A year later, with his professor, he founded Algordanza.
A diamond is 99.9% carbon, while the human body is 20%. After cremation about 1-5% of carbon remains.
Natural diamonds – symbols of love and the everlasting – are created under enormous pressure and high temperatures inside of the earth. Algordanza replicates the process in its laboratory, creating stones within weeks.
About 85 diamonds a month are made, costing between about £2,800 and £12,700.
The start-up investment in Algordanza was £300,000, with Mr Willy using all his savings.
“After six years, we were able to pay ourselves a proper salary,” he says. The business now employs 60 people worldwide, with 12 based at the Switzerland headquarters.
Many of Algordanza’s customers have gone through huge trauma. “We have families who lost someone in events and incidents such as the tsunami in Thailand, the earthquake in Chile, soldiers who lost their lives on duty in Afghanistan, the terror attack in Madrid, the flight crash of Germanwings,” Mr Willy says.
In Santa Fe, in the US, Justin Crowe, 29, uses cremated ashes as raw material for pottery.
A fine art graduate, he founded Chronicle Cremation Designs in 2016. He already ran a ceramics studio, so needed minimal initial investment. But he has now raised $100,000 (£78,400) seed funding to expand.
A typical ceramic glaze is made up of flint, minerals and clay. “We’ve developed a special glaze recipe that incorporates the cremated remains, which ultimately function to form the gloss you see on the surface of the work,” Mr Crowe says.
His Lifeware product line includes vases, urns, and coffee cups. The most popular items are candle luminaries and jewellery. Prices range from $195 for a necklace up to $995 for a large bowl.
He gets plenty of unusual requests, such as from a women who wanted the ashes of her sister and two dogs glazed on to coffee mugs.
Mr Crowe acknowledges that some people feel that transforming someone into a piece of homeware is disrespectful.
But, he says, a flower vase or candle holder provide daily reminders of loved ones. “Ultimately, the pieces are about keeping memories close in daily life.”