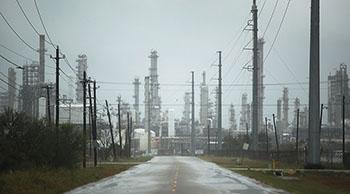 As Hurricane Harvey slammed Texas, much of the state’s oil production was forced to shut down. But global oil prices have continued to fall.
Hurricane Katrina caused significant damage to US refinery and production capacity in the Gulf of Mexico, and forced oil prices to briefly spike to above $70 per barrel in September 2005.
Contrary to analysts’ bullish forecasts before Harvey arrived, the price for West Texas Intermediate (WTI) crude dropped nearly three percent on Monday and settled at $46.57 – the worst daily performance since July 7.

WTI continued to slide on Wednesday, down 34 cents to $46.10 per barrel. Brent crude traded 54 cents lower at $51.46 a barrel.
At the same time, US gasoline prices spiked to their highest level since the middle of 2015 after the storm knocked out nearly a quarter of US refineries. On Tuesday, US gasoline futures jumped four percent.
According to industry experts, the largest impact from the hurricane is currently on refined product supply, which is set to rise further.
“Crude oil prices are lower because of how much refining capacity (demand for crude oil) is offline due to the storm. Gasoline prices, on the other hand, are higher due to the refinery shut ins,” Jenna Delaney, a Senior Oil Analyst with PIRA Energy Group, a unit of S&P Global Platts, told RT.
The analyst expects draws on gasoline and other refined products and inventories in the near term due to the dramatic reduction in refining capacity.
“As of Monday afternoon, between 2.5 million bpd and 3.5 million bpd of refining capacity in the Gulf Coast region was offline due to a combination of refineries being shut down or running at reduced rates. Although this is less than 20 percent of total refining capacity in the US, the Gulf Coast region is a major supplier of refined products both locally, and into other parts of the country,” Delaney said.